“[At a political event, when Heartfield noticed …] a certain type of person appears before him, say a hypocrite, or a platitude maker bearing  the mask of an academic, or a person who believes the parliamentary government  stabilized the economy and who speaks as if stuffed irreconcilability, then right away Johnny [John Heartfield] steps up fully for a fight, the freckles distinctly bulge from his face as it tarnishes blue with rage, his lips part to reveal prone teeth, and with bird song and a stutter he lets loose a canon of blended curses.”

Photomontages of the Nazi Years. The AIZ Anti-Fascist Photomontage Collages For The AIZ, Published By Willi Münzenberg, 1930

In 1930, Heartfield takes his assault on The Third Reich with what he later described as his “Photomontages of the Nazi Years.” From 1930 to 1938, under constant death threat from the SS and the Gestapo, he creates an astonishing 240 political art masterpieces that in total became a devastating blow-by-blow visual account of the rise of the Nazis.

John Heartfield was a resident of Berlin in 1930. The city was swarming with supporters of Adolf Hitler and the Nazi Party.

The AIZ covers were produced by rotogravure masters. They give Heartfield the ability to mass produce his political photomontages for newsstands all over Berlin. There’s documentation to support the claim that the AIZ Magazine had the second highest circulation (300,000-500,000) of any periodical in Nazi Germany.

Heartfield’s AIZ covers placed him constantly at risk. He is physically assaulted several times. Yet, he appeared to be a man possessed. He continued to create his politically charged art, seemingly oblivious to the growing danger surrounding him.

The 1930 AIZ Magazine cover below is an example of how Heartfield often turned The Nazi’s own words against them. A Nazi supporter claimed that Hitler was a tool in God’s hands. Heartfield’s answer? No! Hitler was a tool in Thyssen’s hands! Fritz Thyssen headed the Thyssen mining and steel making company. He eventually controlled more than 75 percent of Germany’s iron ore reserves and employed 200,000 people.

In 1923, Thyssen began to make large donations to the Nazi Party. He did not join The Nazi Party until 1933. Thyssen’s principal motive in supporting the National Socialists was his fear of communism. At the end of World War II, it was revealed that he had donated at least 650,000 Reichsmarks to right-wing parties, mostly to the Nazis.

Thyssen proudly claimed that he personally donated one million marks to the Nazi Party. After the war, he was tried for his support of Adolf Hitler. He was made to pay a small (for him) fine for his crimes. Thyssen comfortably lived out the remainder of his life. He died an old man in Argentina.

Heartfield’s collage of Thyssen pulling Hitler’s string shows how Heartfield could infuse his montages with a stunning visual clarity. He consistently avoided a heavy-handed approach that might blunt his message.

Heartfield continues to expand his artistic circle in Berlin. He makes the acquaintance of Vladimir Mayakovsky and Iilya Ehrenburg. 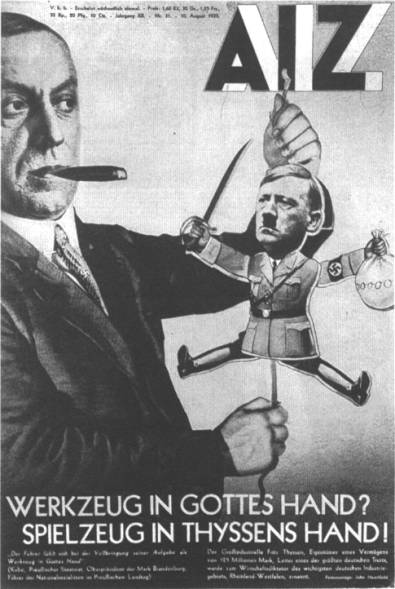 With 1930 AIZ cover, John Heartfield reveals that Hitler was a puppet of his capitalist masters. Werkzeug In Gottes Hand? [Tool In God’s Hand?] Spielzeug In Thyssens Hand! [Toy In Thyssen’s Hand!].