In May 2018, Winston and John joined Savage Pencil in an informal discussion about the effect and history of collage art. Winston Smith is one of the greatest collage artists of modern times. His work has appeared on venues as varied as New Yorker covers and famous punk band albums. Winston is a San Francisco icon.

Many years ago, while leafing through books, Winston discovered photomontages by the groundbreaking antifascist artist John Heartfield. Winston says those collages profoundly affected him, and he names John Heartfield one of his most important influences.

This video features the iconic collage artist Winston Smith & John J Heartfield, the grandson of Dadaist John Heartfield, in a conversation with Savage Pencil in London, May 2018. 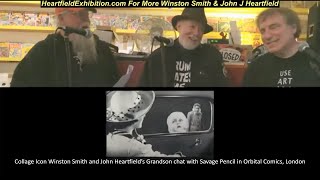 City Lights Bookstore asked me to speak at the 2016 DADA WORLD FAIR. The event was to take place in Winston Smith’s Collage Museum in North Beach at 8 PM on a November evening, three days before the fateful 2016 presidential election. Whenever I speak to an audience, I like to have a technical check-up a few hours before to purge the inevitable “demo gremlins.” So I arranged to meet with Winston around noon for a soundcheck. When I walked into the Collage Museum, I couldn’t believe the sheer amount, variety, and quality of the art stored there. There were posters, sculptures, original collages, and much more. There were hundreds of pieces to view, and each was worth a close examination.

Winston and I took care of technical matters in about fifteen minutes. Then, always the gracious host, Winston opened a bottle of Chianti, and we sat down for a quick chat. That brief chat lasted from noon to 7 PM. It only paused for a few minutes when Winston’s wife, Chick, a gourmet vegetarian chef, laid out a sumptuous meal for all of us. Winston and I, two strangers at noon, had chatted non-stop for seven hours. In those hours, we became good friends.

Since that day, Winston and I have had many long talks. Winston, Chick, my wife, Michelle, and I shared a flat in London for a week before this event with Savage Pencil. Talking with Winston is always a joy and an experience. A while ago, I told him that he weaves memories, opinions, and facts together into a fascinating audio collage when we talk. He immediately agreed.

I’m delighted that Winston Smith is one of the eminent modern collage artists featured in The John Heartfield Exhibition. My grandfather would have loved, as I do, to sit, drink wine, and chat with Winston for hours.

Find out more about Winston Smith and John J Heartfield.

You can see the entire 50-minute interview on the Orbital Comics YouTube Channel.