“Hold Up Your Hand!”

In 1928, Heartfield creates one of his most famous images, “5 Finger Hat Die Hand” (The Hand Has Five Fingers). It remains one of the most iconic political images of all time.

Heartfield’s son, Tom George Heartfield, told Heartfield’s grandson this story. The KPD Party, the political party that opposed the Nazis, searched for a symbol to link its five candidates. John Heartfield jumped up in a meeting. He waved his hand, saying, “What is more powerful than the fingers of the human hand working together.” Everyone immediately agreed. Heartfield went to a factory and, as the workers left, he shouted, “Hold Up Your Hand!” Later, he sorted though hundreds of photographs to choose the most memorable image.

The text on the original poster is: “5 fingers has a hand! With these 5 grab the enemy!“ The enemy was Hitler and the Nazi Party. This simple image of a human hand with the power to create and destroy resonates through the decades. This slogan inspired part of the text contained on the back of the System of a Down album: “The hand has five fingers, capable and powerful, with the ability to destroy as well as create.” A man in Guatemala tattooed the hand on his back in 2011. One hand voting can make the difference between freedom and dictatorship.

In 1928, Heartfield continues to create stage designs for the German Theatre. He creates some of his finest graphics designs for Malik-Verlag publishing. 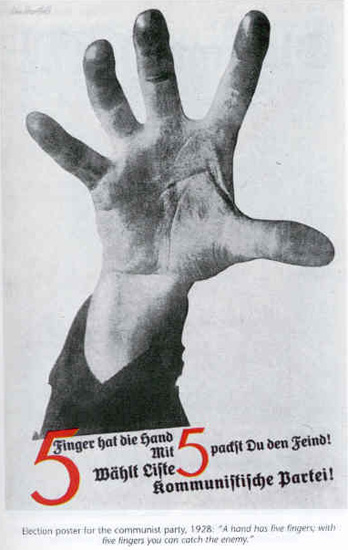 John Heartfield's famous political art was created to support the five political candidates who opposed the Nazi Party. The poster appeared on walls all over Germany.