Art as a Weapon
John Heartfield’s Life, Work, and Legacy

This presentation by John Heartfield’s grandson was created and presented exclusively for The United Kingdom’s Association of Jewish Refugees. 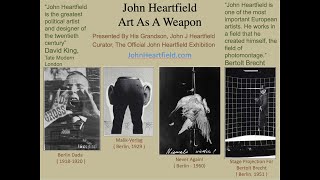 
The Association of Jewish Refugees in the United Kingdom asked John Heartfield’s grandson, Professor John J Heartfield, to speak about his grandfather’s life and artwork, with an interest in his years as a refugee and his twelve years in the UK. Following the presentation, John and the distinguished art historian Monica Bohm-Duchen discussed Heartfield’s core beliefs and his years in England. John shared personal memories from when he spent vacations with his grandfather in Liguria, Italy. John also answered questions from the audience. The entire 94-minute event, including those questions and answers, is available here on YouTube.

John Heartfield’s life was cinematic. The German-born artist pioneered anti-fascist art with his photomontages and graphic designs attacking the Nazi agenda and fascist philosophy. His artistic output was prolific and revolutionary. Many of today’s finest political artists around the world consider his work to be their most important influence, and several of the most well-known collage artists are featured in this exhibition.

A lifelong pacifist, Heartfield worked under the harshest and most dangerous conditions, using simple tools such as scissors and paste to create unforgettable artworks (“art as a weapon”). He publicly struggled against one of the most powerful propaganda machines the world has ever known, and his art was so effective he rose to the top of the Gestapo’s Most Wanted List. His art remains a most powerful warning against the inevitable result of a fascist agenda.

The Association of Jewish Refugees is a charity registered with the Charity Commission for England and Wales (1149882) and is a member of the UK delegation to the International Holocaust Remembrance Alliance (IHRA).

Visit the AJR website to learn more about this essential organization.