The John Heartfield Exhibition And You

Everything Old Is New Again? 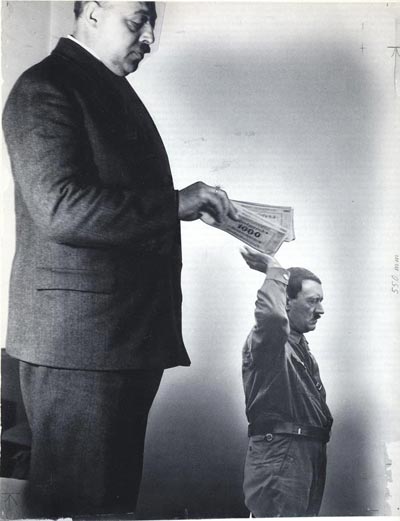 HEARTFIELD ON MONEY IN POLITICS

Are you deeply concerned about the influence of big money on politicians and their political positions?
This image of a small politician with his hand out to the contributor who dominates him is a powerful as a ten thousand word article.
Swap in whatever politician and financier you choose. 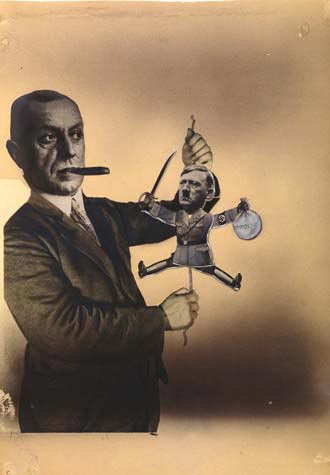 Mega donors say, "I never receive anything when I make a political contribution."
Are politicians so dense that they don't know what their mega donors want?
Will mega donors step up with a huge contribution the next time if their candidates do not implement policies that favor their bottom line?
Swap in whatever politician and financier you choose.

The caption for this brutal image "Niemals weider!" (Never Again!) is a universal call for solutions leading to peace rather than acceptance of reasons that lead to war
My grandfather was a lifelong pacifist and a lover of the natural world.
Can words better convey a more forceful and clear call for world peace? 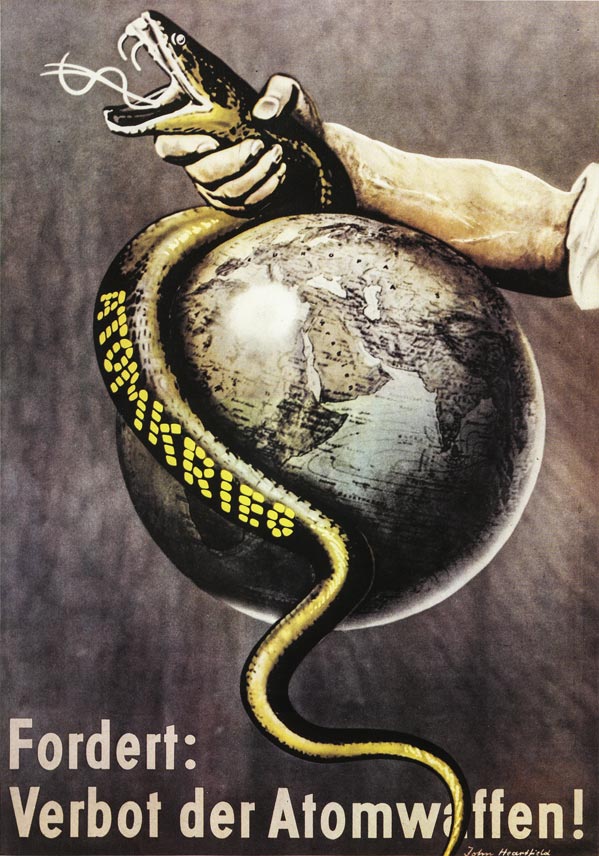 We don't often think about it.
Yet, we live every day with the threat that within minutes all life on earth could be wiped out.
There are decaying weapon's systems and sworn enemies doing everything possible to develop shiny new ones.
Rather than reigning in the danger, the snake continues to become larger, more powerful, and more difficult to control.

We all depend that justice will be applied in our lives without prejudice.
How can any of us ever feel truly safe if we believe the enforcement and prosecution will be unbalanced by bigotry and financial considerations?
John Heartfield's classic image of Lady Justice is a warning to all. 
EVERYTHING OLD HASN’T CHANGED!
What can be done to ensure the world never again experiences the horror of Adolf Hitler and The Third Reich? The Third Reich implemented policies designed to exterminate entire races and religions. Hitler’s fevered dreams of world conquest led to a war of previously unthinkable destruction.

We cannot ignore the prominent voices spreading ignorance, xenophobia, racism, and bigotry in current world politics. We hear it in political hate speech in the same nations that sacrificed so much to oppose The Third Reich and its allies. Propaganda and out-of-control greed for profits at any cost remain. Ignorance, outright lies, and the influence of big money on government policies have the potential to destroy our planet.

The John Heartfield Exhibition shows that one artist with a clear message can make a real difference. My grandfather’s art literally saved lives. There is a thread that runs through his work. He makes it crystal clear how ugly propaganda and the ideas behind it quickly become toxic.

As I honor John Heartfield’s courage and feature his artistic brilliance, this exhibition is becoming A Museum Of Powerful Art. It features exhibits against ignorance from contemporary artists who find inspiration in John Heartfield’s life and work

You know a picture is worth more than a thousand words. And it lasts longer than the nightly media nonsense trumpeting the latest outrage. Support Powerful Art by visiting The John Heartfield Exhibition Shop.