John Heartfield’s 240 most famous political works of art are the most illuminating blow-by-blow visual critique of fascism and Nazis. My grandfather worked night after night, year after year, and constantly risked his life to combine his talent for collage with his understanding of the factors that directly led to the horrors of World War II. He was gifted with a heart capable of great compassion and a mind capable of using satire to strike at the core of ugly fascist reality. His vision and work are as essential today as when he used his art “as a weapon” against fascism and the Nazis.

Fascism found its voice with Italian journalist and war veteran Benito Mussolini beginning in 1922. Fascism is not a political system, such as Democracy or Socialism. It is a political ideology and movement. Fascists string together ideas from different sources to address momentary challenges.

The term Fascism comes from the Italian word “Fascio” which translates to “a bundle.” In ancient times the national symbol of the Roman Empire was a bundle of wood and an ax. It signified unity and strength. Mussolini used the word ‘Fascio’ to describe his strength and express his goal to unify Italy. His concept of “unity” was to send his Blackshirts throughout Italy to terrorize or eliminate his political opponents. 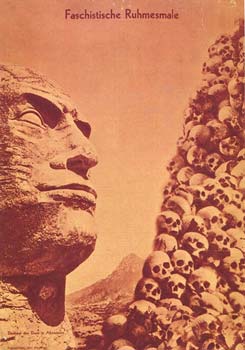 Those who desire government by dictatorship attempt to create a “fascist reality.” This reality does not pursue or depend on provable facts. A charismatic fascist leader can claim the sun is shining while his devoted followers stand in the pouring rain, cheering his report on the weather. The leader doesn’t hypnotize his audience. They know they are wet. However, they don’t care. Accepting the leader’s reality and wanting to see his strongman’s promises fulfilled are more important to them than the factual reality they can see, hear, or feel. Trump broke almost every one of his campaign promises. Mexico did not pay for a wall. There is no wall. The vast majority of the “finest people” he hired quickly resigned and wrote books about Trump’s astonishing lack of intelligence and leadership. The list goes on. But his supporters do not seem to care. They claim he “tells it like it is,” when almost every word that comes out of his mouth is a lie or a pathetic whine regarding how he’s been mistreated.

Targeted propaganda repeats the leader’s lies as often as necessary to make those lies sound like the truth. Such propaganda is the art of convincing people that something very bad for them is actually very good. Throughout history, countries that fall under fascist leadership have learned that ultimate power corrupts and a strongman’s promises of “greatness” invariably result in disaster for everyone. Look at the cities of Germany and Italy at the end of WWII. 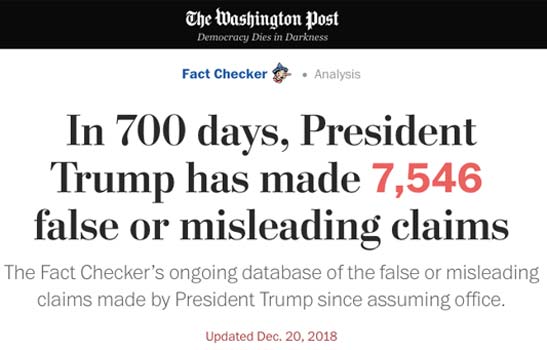 That’s an average of 11 lies every day!
Have you ever lied 11 times in even one day?


IS DONALD TRUMP TRYING TO BE A FASCIST DICTATOR?

I do not believe Donald Trump has a plan to be a fascist dictator such as Mussolini or Hitler. He is neither intelligent, literate, or strategic enough. His pathological lying is not convincing or spoken with a cohesive goal. However, it seems undeniable there are people close to Trump who are intelligent and strategic enough to advise him to use fascist tactics to increase his own wealth and notoriety – the only two things Trump seems to care about.

The same fascist tactics used by Trump in the United States threaten democracies throughout Europe in historically strong democracies such as Czechoslovakia, France, Italy, and England. Fascist tactics were invaluable in winning the disastrous Brexit vote. Neo-Nazis are marching again in the streets of Berlin and occupying seats in the German government. It’s not appropriate to compare Donald Trump to Adolf Hitler or Benito Mussolini for various reasons. However, the spread of fascist ideology creates deadly cancer in society and the body politic. 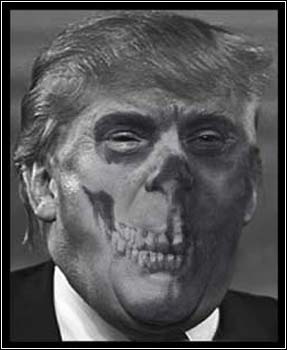 Fascists foster extreme nationalism in order to solidify a loyal base. Nationalism is not the same as patriotism. Patriots love their country and understand that alliances with other democracies strengthen a nation. Such alliances are essential to maintaining world peace. Fascists call this concept “globalism.” Extreme nationalists believe their country is superior to all others and view all other countries as a threat to that supremacy. Fascists consider alliances like NATO and a desire to assist countries in distress to be a waste of resources and a sign of weakness. The one thing a fascist must never do is show weakness.

Donald Trump’s often repeated phrase “Only I can fix it” is the classic boast of every fascist dictator. A fascist state looks to the wisdom, power, and final decisions of only one leader.

3. DEMAND RETURN TO A GOLDEN AGE OF NATIONAL GREATNESS

“Make America Great Again”
MAGA is actually a racist dog whistle to the first African-American President. Trump began his political career fueling the idiotic conspiracy that Barack Obama was not a “legitimate” president because he wasn’t born in the United States. The vast majority of Americans, including this author, believes America, for all its faults, is a great country. Those who sport MAGA hats appear to desire to return to an “era of greatness” when white people were favored and in charge. Installing privileged white men in positions of power is one of the few campaign promises Donald Trump has kept. And most of those men deserted him because of his obvious inability to perform the basic duties of the president.

Much of Fox News late-night programming has devolved into little more than state-run propaganda for Donald Trump. Right-wing Trump radio hosts spread insane conspiracy theories with absolutely no basis in fact. It is almost humorous that the president of the United States gets his data and marching orders by slavishly following these media outlets. In return, he labels all other media, no matter how fact-based, as “fake news.” Fox is owned by Australian immigrant Rupert Murdoch. When Murdoch began Fox News he was looking to launch a fair and balanced news network. But the now-disgraced political operative Roger Ailes quickly steered Fox programming to the extreme right-wing. Murdoch was unhappy with Ailes’s agenda. He was preparing to fire him until he saw the ratings. As of this writing, America is still awaiting the results of the Mueller probe on the extent of Russian involvement in social media on behalf of their stated favorite candidate, Donald Trump.

Every successful con man must be a great actor. Unlike “no-drama” Obama, Trump is the most theatrical president of the modern era. Can anyone think of a president (or anyone) who has been mentioned in all media more often than Donald Trump? He has truly become “the king of all media.” Before his presidential campaign, Trump made a career out of being a reality television host and allowing his name, his brand, to be placed on buildings in gold letters. Ironically, the name Trump uses to increase his wealth is itself a fantasy. Trump’s grandfather, Friedrich Drumpf, came to America from Germany. “Drumpf” was changed to “Trump” to avoid anti-German immigrant prejudice in America. Trump has subsequently claimed his family came from Scandinavia.

8. USE RELIGION TO MANIPULATE PUBLIC SUPPORT

Trump has proven again and again that he is completely divorced from any sincere religious conviction. Yet he has earned the unwavering support of evangelicals by pandering to their political desires. This is despite the fact he publicly has broken nine of the ten commandments multiple times.

Trump has raised crony capitalism to a new level. He has strived to remove regulations that keep the financial sector, the mining industry, the oil companies, and the manufacturing industry from exercising their worse instincts. Greed capitalism has endangered the entire world by denying climate change and forging ahead with behavior that continues to erode our environment. Trump has consistently favored a corporate state despite polls that show opposing views by the population he is sworn to represent.

Trump introduced a desire for physical violence against protesters at political rallies. He has offered to pay the attorney fees if one of his supporters is arrested for assault on a protester. He has boasted he wanted to personally punch a protester in the face. He has demanded that protesters be roughly dragged away. Perhaps most frightening of all, he has demanded he get his way because his “button” to launch a world-ending nuclear war is larger than those of other countries.

11. EQUATE DEMAGOGUERY ABOUT CRIME WITH “LAW AND ORDER”

Trump often boasted he was the “law and order” candidate. He and his cabinet have justified the most heinous acts with the fascist creed, “We are only administering the law.” Multiple major investigations are swirling around Trump and his associates at the time of this writing. Yet he continues to claim he was the “law and order” president. The New York Times, reporting on his early life, proved Trump’s tale of the rise of his business empire is a complete fabrication. The novel The Godfather begins with the phrase, “Every great fortune begins with a crime.” It may soon be apparent that Trump’s entire organization began with a crime and grew into a criminal organization.

The number of Trump current and former Trump cabinet members who are accused of corruption grows every day. He used the presidency as a tool to increase his wealth and the wealth of his family members. Trump promised he knew the “best” people to help him run the government. A major campaign promise was that he would “drain the swamp.” Instead, he placed spotlights all around the swamp.

A Republican candidate, including Donald Trump, consistently receives fewer votes than a candidate from another party. Yet, they win the election. A great many of these victories can be attributed to blatant voter suppression and extreme Republican redistricting. There was clear voter fraud favoring the Republican candidate in the 2018 Georgia governor’s race. Though Trump is not clever enough to have invented these tactics, he has not criticized them or called for investigations. Instead, he has applauded them and reaped the political rewards.

Donald Trump appears to be obsessed with global trade agreements that are often looked upon with suspicion by noted economists and our allies.

His “amazing tax cut for the middle class” was a transparent giveaway to large corporations and the rich. He has done nothing to decrease the divide between America’s middle class and the wealthiest one percent of the population. Instead, he has significantly widened the gap. An angry middle class becomes more inclined to fall under the spell of fascist leadership.

16. EXPRESS DISDAIN FOR INTELLECTUALS AND SCIENTISTS

When presented with the most comprehensive and globally accepted report on the devastating impacts of climate change, Donald Trump’s response to questions from reporters was, “I don’t believe it.” He continues to express his desire for “clean air and clean water” as if those are commodities he plans to sell after he leaves office.

Perhaps Trump’s most famous quote is, “They let you do anything. Grab ’em by the pussy.” The key word is that sentence “let” is too often ignored. Do you believe women want to be grabbed by their genitals? Do they desire that kind of attention? Trump has told the entire world that he thinks women allow him to get away with committing sexual assault because of his wealth, his fame, or his potential ability to offer them something in return. His media supporters have labeled his words “locker room talk.” Men who respect women do not spout phrases like that, regardless of where they are. A man who would say something like that is a man who views women as inferior creatures to be used. Trump often publicly derides the intelligence of women, especially women of color.