“The doom of a nation can be averted only by a storm of flowing passion,
but only those who are passionate themselves can arouse passion in others.”

Escape From Nazis. Anti-Nazi Artist Activist John Heartfield Is Number-Five On The Gestapo’s Most Wanted List, 1938.

Nazi Germany invades Czechoslovakia in 1938. Diplomatic relations between the countries have been falling apart for years. One reason is the Czech government’s refusal to bow to pressure from the German ambassador and censor the anti-Nazi collages of the anti-Nazi political artist John Heartfield.

Heartfield has found support from artists and writers throughout the free world. His AIZ collages have become famous on both sides of the Atlantic for the clear and powerful messages of his “art as a weapon.” The 240 political art masterpieces he produced from 1930 to 1938 are a blow-by-blow visual description of the lies and ugliness of fascism and Nazi philosophy. They remain the most powerful collection of art against the madness of The Third Reich.

The Gestapo was searching for eighty-five people when the German army marched into Czechoslovakia. John Heartfield was number-five on their list. Once again, with the help of supporters, he had a narrow escape from Nazis. He eventually traveled to England. Others on the Gestapo’s list were not so fortunate. They were either killed or sent to concentration camps. Heartfield continued to infuriate Hitler when he participated in the “Freedom Calling” radio program in London. 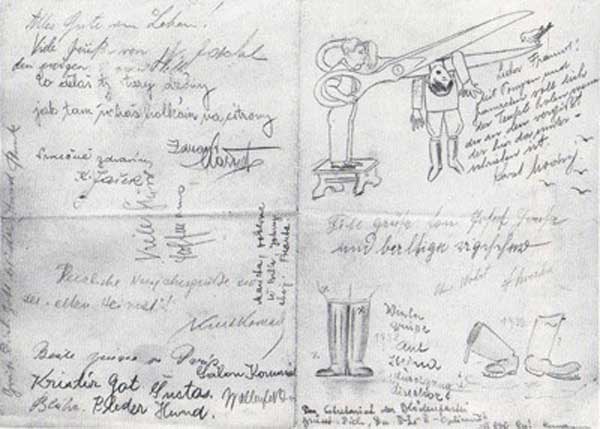 Fanciful John Heartfield letter, considering the man who wrote it was running for his life. 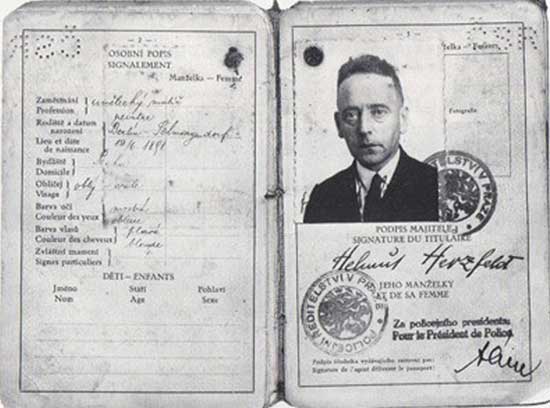 The document that allowed John Heartfield (born Helmut Herzfeld) to escape to London from Czechoslovakia, 1938.