Antifascist Art As A Weapon Against Hitler & Fascists. Anti-Fascist Artist John Heartfield Photomontages (Collages) Are A Visual Jolt Of Truth Against Propaganda Lies. 1928-1939

In The Belly Of The Beast

John Heartfield is a Berlin resident until 1933. His stunning anti-Nazi anti-fascist political collage art (known as photomontage) appears all over Berlin on AIZ magazine covers sold on street corner newsstands. The AIZ circulation eventually reaches 300,000 to 500,000 copies weekly. Anti-Nazi posters of his sarcastic and satiric collages appear all over Berlin walls.

Heartfield’s photomontages openly mock Adolf Hitler, Hermann Goering, and the entire militaristic Nazi philosophy. The blue-eyed John Heartfield is five-foot-two inches tall (153 cm). He weighs perhaps one hundred pounds (45.36 kg). He is a public figure. This frail antifascist artist literally dares German fascists to respond. And they do. Supporters of Hitler kick in Heartfield’s teeth. The throw him from the top tier of a streetcar. He’s savagely beaten in a movie theatre because he swears at a fascist supporter much more than twice his size and weight.

Slightly over forty percent of the vote is enough for Hindenburg to offer the chancellorship of Germany to Adolf Hitler in 1933. Following the burning of the German Parliament (Reichstag), Hitler and The National Socialist (Nazi Party) seize complete control of Germany using the Enabling Act in March 1933. On Good Friday, April 14, 1933, Hitler’s SS smashed down the door of Heartfield’s apartment. They obviously aim to kill him and destroy all political art against Hitler and the Third Reich.

A Narrow Escape From The Nazis

Heartfield’s escape through the French doors of his modest apartment is almost theatrical. He jumps through the second-story French windows of his apartment, injuring his ankle. He avoids capture by hiding in a small bin in the back of an alley near his apartment. He waits for hours as the SS shout his name and ransack his home, destroying everything they find. Finally, he escapes Nazi Germany by walking across the Sudeten Mountains to Czechoslovakia.

He continues to create and distribute his world famous WWII collages (photomontages) in Prague for the outlawed AIZ magazine.

The Fight Continues In Prague

On November 1, 1934, Heartfield’s name (surname Herzfeld) can be found in an “Index of Jews Who Germany Nationality was Annulled by Nazi Regime, 1935-1944.” See below.

By 1938, Heartfield’s “art as a weapon” antifascist art has made him number-five on the Gestapo’s Most Wanted List.

From 1930-1938, John Heartfield, a fugitive under a death sentence, working night and day produced a staggering total of nearly 240 full-page photomontages for the AIZ.

David King of The Tate Modern in his book, John Heartfield, The Devastating Power Of Laughter wrote, “These [John Heartfield]AIZ covers were the most illuminating blow-by-blow visual critique ever made of the rise of the Nazis. Heartfield worked night after night, year after year for the AIZ, combining his skill in handcrafted montage with his intelligent grasp of the root causes that brought about the often horrific subject matter that he had to deal with, and pushing political satire to new extremes.”

This antifascist art against ignorance, bigotry, racism, and fascism would become known as Heartfield’s world famous “Photomontages Of The Nazi Period.”

View some of John Heartfield’s most famous art as a weapon in FAMOUS POLITICAL ART. 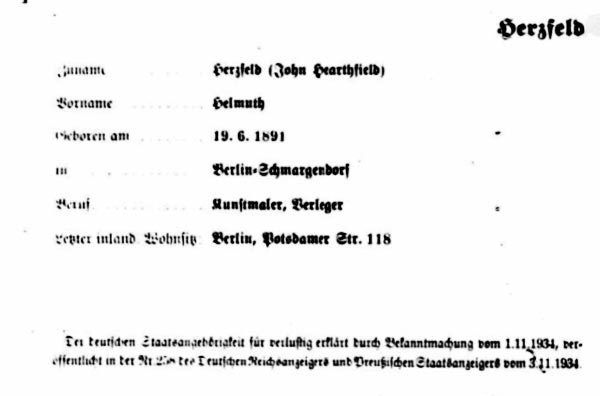