WHY IS JOHN HEARTFIELD “THE HIDDEN GENIUS”?

WHY SHOULD I CARE ABOUT JOHN HEARTFIELD?

World famous composer and playwright Bertolt Brecht wrote,
“John Heartfield is one of the most important European artists.”

“Heartfield became a neglected artist.
The neglect is almost as famous as he is.”
Douglas Kahn
Douglas Kahn’s book: John Heartfield: Art and Mass Media

What is the reason that the vast majority of people interested in art or twentieth century history know nothing about John Heartfield?

And yet, a Google or Yahoo search for “German Political Artists” or “German Dada Artists” mentioned on the Internet fails to return one reference to John Heartfield.

When the curator shows people Heartfield’s montage Hitler swallows Gold and spits Junk on his iPhone and explains that John Heartfield produced that montage while living in the Berlin of Nazi Germany, their responses are predictable.

“How did he survive?”

“You should do more to tell the world who he was.”

“Why don’t people know about him?”

The curator of this Exhibition lives in a largely Jewish community. He plays cards with a Holocaust survivor. The curator frequents the New York City Art Community. And yet, he has very rarely encountered anyone outside the academic world who recognizes the name “John Heartfield.”

This lack of renown for John Heartfield’s work not only affects his contribution to political art and graphic design.

As Maud Lavin writes in Art in America, “estheticized history” has created “a policy that contributes to a repression not only of Heartfield’s work but of the political roles of avant-garde artists in the ’20s in general.”

That observation is equally applicable to a great deal of the powerful political art being produced by contemporary collage artists.

The Official John Heartfield Exhibition and Archive is dedicated to changing that injustice. As this section of the Exhibition expands, the curator will explain why John Heartfield is “The Hidden Genius.” He will also detail his continuing efforts to convince the German government and the German art institutions that control the vast majority of his grandfather’s work that the world needs to see John Heartfield’s complete artistic legacy.

If you believe art
must not be censored.

If you believe a government institution must not bury an artist’s reputation and renown.

If you believe art can change the world, Support The Exhibition. 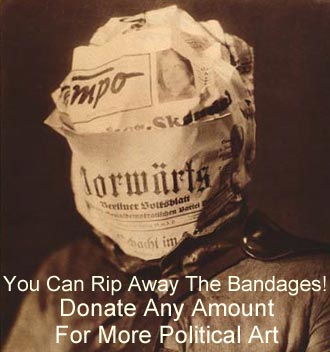 Follow our social media forums to add your voice.

As an artist and a man, Heartfield lived an extraordinary life. As a young artist, he was an influential member of a German Dada Art Community that included George Grosz and Hannah Hoch. Heartfield is credited as the founder of modern montage.

Heartfield invented the concept of wraparound 3-D book dust covers. He created these works of advertising art for authors such as Upton Sinclair, John Dos Passos, and Kurt Tucholsky.

However, he is probably best known by those who recognize his name as a man who risked his life and dedicated his art to fighting the propaganda machine of The Third Reich. His “Photomontages of The Nazi Period” mocked, vilified, and exposed the bigotry and lies of Adolf Hitler and fascism.

John Heartfield’s incredibly courageous masterpieces of political satire filled the streets of Berlin on the covers of popular magazines and posters. Although he was beaten and thrown from a streetcar, John Heartfield remained a resident of Berlin until Easter Sunday, April 1933.

He was forced to flee Nazi Germany steps ahead of an SS assassination squad. Heartfield continued to fight to distribute his collages exposing the madness of Adolf Hitler and The Third Reich in Czechoslovakia. His “art as a weapon” brought him to number-five on the Gestapo’s Most Wanted List.

The curator of this exhibition has toured The Heartfield Archiv in Berlin. It’s difficult to imagine how much of John Heartfield’s art survived and is contained within its walls. There is a vast collection of original art, posters, sketches, stage models, and much much more.

Public exposure of this artistic legacy in museums such as MOMA, The Metropolitan Museum of Art, and The Holocaust Museum would make John Heartfield instantly recognizable as one of the twentieth century’s most important and influential artists. His groundbreaking work is reflected in almost every form of modern media, including graphic design on the Internet.

Germany’s government and art institutions should be delighted to support in every way the re-emergence of this historic artistic giant.

Heartfield was not only one of the most inventive and influential artists of the twentieth century. He is representative of the large community of Germans who despised Adolf Hitler, his politics, and his beliefs.