From John Heartfield to Bob Dylan to John Lennon to Beyoncé, artists have exposed villains, emboldened resistance, and forced conversations.

The German antifascist artist John Heartfield was a pacifist. He rose to number-five on the Gestapo’s Most Wanted List, working inside and in the shadow of the Third Reich. His only crime was his “art as a weapon” that used integrity and humor to reveal the fascist lies of dictators. Learn his fascinating life story.

German artist John Heartfield was Number 5 on the Gestapo’s Most-Wanted List for his Art As A Weapon, and his art saved lives.

Heartfield created photo montage (collage) with George Grosz in 1916. He was an influential member of Berlin Club Dada.

Heartfield invented 3D Book Covers. His book jackets told stories and revolutionized typography, making it a visual element of the book’s graphic design.
John Heartfield coined the word “photomontage” for his famous political art collages. He is one of history’s most prolific collage masters, employing art as a weapon to answer fascist and Nazi propaganda. Heartfield lived openly in Berlin during Hitler’s rise to power as popular magazines and posters displayed his anti-Nazi antifascist collage throughout the city. 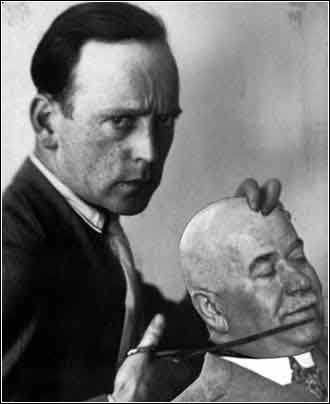 “The bigger the lie the better because it is easier to make people believe a big lie than a small one.”
Adolf Hitler

“John Heartfield is one of the most important European artists.”
Bertolt Brecht

“Heartfield became a neglected artist. The neglect is almost as famous as he is.”
Professor Douglas Kahn 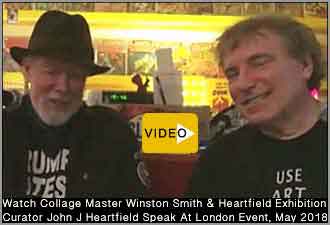 Facts are facts. Those who spout ‘alternate facts’ try to convince people that something terrible for them is actually very good for them. The images in The Heartfield Exhibition inspire voters and unmask the tactics used by fascist regimes.

Fascism is not a form of government. It is a collection of tactics to convince voters to surrender their freedom by handing total power to a dictator. Freedom is fascism’s victim. Freedom to question. Freedom to choose. Freedom to create. Fascist victories always bring suffering.

“There is a strong family resemblance about misdeeds, and if you have all the details of a thousand at your finger ends, it is odd if you can’t unravel the thousand and first.”
Sherlock Holmes, A Study In Scarlet

“Words are flying out like endless rain…” John Lennon

An endless rain of words can’t seem to keep up with the latest outrage. Every day, politicians try to pivot away from their ugly words and actions. But powerful political art never pivots. A striking image remains in your mind like a great song. These lingering images inspire voters to make choices that racism, misogyny, xenophobia, climate change denial, and drumbeats for senseless wars.

One Hand Casting A Vote Can Change Everything

It’s essential to understand the life and work of John Heartfield. A lifelong pacifist, Heartfield knew violence is never the answer. Instead, he used humor and juxtapositions to reveal the true motives of those who traffic in hatred and division. His art continues to unmask their propaganda, influence modern artists, and inspire voters. Many high-profile artists have joined the exhibition. The images in this exhibition, past and present, remind us that fascist tactics always end in a horror show.

Contribute Anything to help the exhibition continue to reveal the truth behind alternate facts.

The Heartfield Exhibition Shop Promotes Art & Artists With Integrity & CourageOne of the first 250 customers will be randomly chosen to win a Special Prize.


A Message From John Heartfield’s Grandson