Winston Smith became famous for his album covers and graphics for San Francisco punk legends Dead Kennedys. A self-described Punk Art Surrealist, Winston is a master of “hand-carved” collage. After returning home after years abroad, the accepted corporate domination of American politics and society astonished him. So he worked to combine “safe” magazine images into politically charged works of art.

Pocket Satire Cutting-Edge Collage. Oliver Dunne & Siobhán McCooey are collage artists and writers from Dublin, Ireland. All their work is handmade, with scissors and glue, using old magazines and promotional material. They do not use Photoshop. Oliver & Siobhán see their work as continuing in the tradition of John Heartfield and the artists of the Weimar Republic. Their work has been featured in many publications, includin Punch, Hot Press.

Gordon Coldwell “For the past 5 years, I have been making artworks every day. My preoccupation is concerned with the message, meaning, and the ongoing development of my own pictorial language. Like John Heartfield, I want my digital artworks to be available to as many people as possible. I share my works daily via Twitter, Instagram, and Facebook.”

David King was a San Francisco artist who designed the symbol for the British punk bank, Crass. Sadly, David is no longer with us. His juxtapositions, created in the medium of stencil art, are only one reason we remember this gentle, brilliant artist. David’s layered colorful satiric graphics would make influential political posters and t-shirts.

FaMoUs EmpTy Sky is a multi-talented Canadian mixed media artist who lives on Mayne Island. She says her life and art were forever changed when she discovered the German Dada & political collage master John Heartfield. Complex, often spiritual collage, is FaMoUs EmpTy Sky’s obsession. Recently, she developed an entirely original art technique that produces stunning images. These works of art are the Nnots.

Andrea Hofmann is a brilliant German scholar and a great friend of The John Heartfield Exhibition. Her insightful commentaries on Heartfield’s work already appear on several pages in the Art As A Weapon section. The analyses she’s written for some of the most topical Heartfield pieces, such as women’s issues and money in politics, merit their own exhibit in One Hand Art. 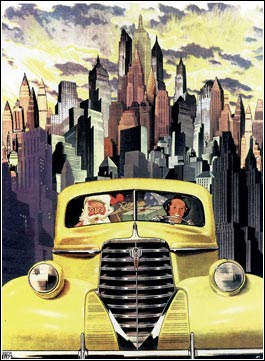 Santa Is My Copilot
Winston Smith 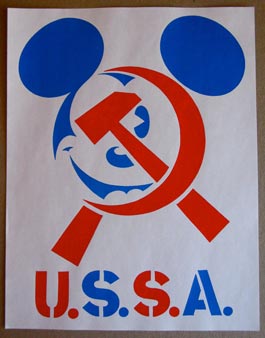 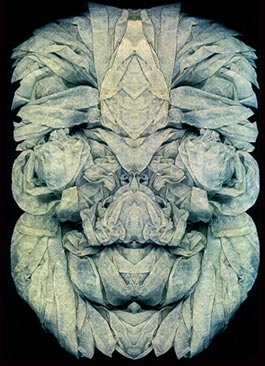 The artist John Heartfield wanted his artwork to be readily available to as many people as possible. He would have loved the Internet. His art was much more than masterpieces of imagination and technique. They were warnings. The consistent message that runs through his work is authoritarians and war can never be solutions to issues that face humanity. Voting for dictators who claim they alone can fix a nation’s issues is madness.

We must resist, and John Heartfield believed the most effective form of resistance was quickly answering lies with facts, hatred with humor, and conspiracies with common sense.

Art in the One Hand Art exhibit is more than political. “One Hand” artists find inspiration in the life and work of John Heartfield. They want to expose the alternate facts of Trumpism and politicians who support his American con game. His voters protest they are fighting for their freedom. Perhaps some can be persuaded that fascist tactics like streams of lies, voter suppression, and unconditional loyalty to individuals for political gain are the quickest way to lose the freedom to question, choose, and create.

Artists in this exhibition play on modern culture, often using techniques that take full advantage of our ever-evolving technology. In a real sense, these artists reveal that the division and out-of-control greed that led to the rise of fascism in the twentieth century still remain very much with us today.

The One Hand Art exhibit is about the same kind of humor and revelations found in most of John Heartfield’s work.