A Multimedia Exhibition Of German Dada, Many Forms Of German Art, and German Political Art 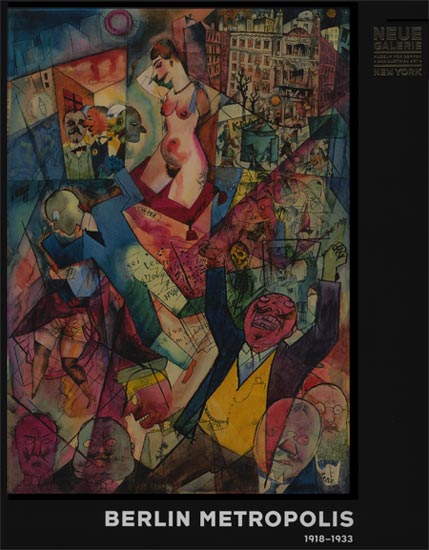 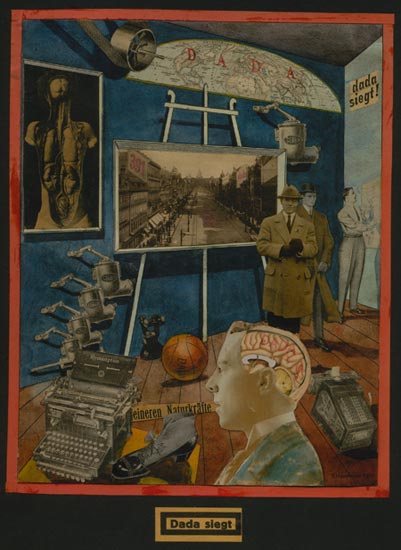 I was able to take some photos in front of John Heartfield’s AIZ covers and his photomontages of the Nazi period such as Adolf The Superman, Swallows Gold And Spits Junk and Millions Stand Behind Him, The Meaning Of The Hitler Salute. These were silver plates of the original maquettes. However, there were also some original pieces. 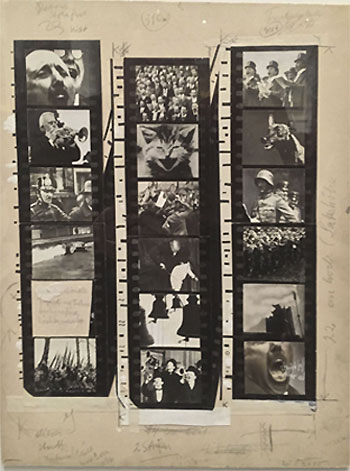 It was exciting to stand close to them and know there were in my grandfather’s hands. These originals give the viewer a greater appreciation for the Heartfield output that was created from these works of political art. 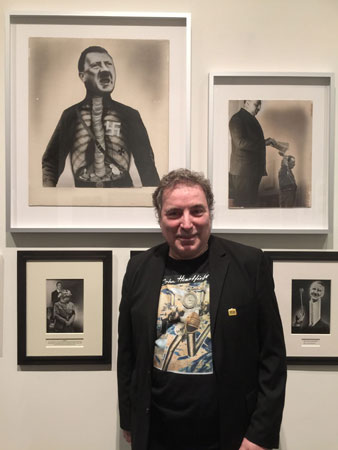 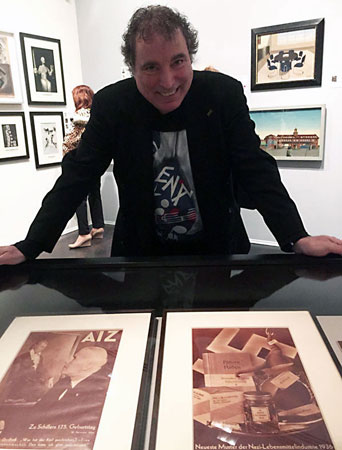 Many incredible artists were represented. I especially enjoyed seeing the work of some of my favorite Dadaists such as George Grosz and Hannah Höch. Berlin Dada was short lived, but incredibly influential and prolific. The vision of Berlin Dadaists stretches across decades to touch artists like David Bowie.

If you missed the show (it closed on January 4, 2016), I highly recommend you purchase the large beautiful accompanying catalog, BERLIN METROPOLIS: 1918-1933. It’s available in the Neue Galerie bookstore, along with many other exceptional art and history books. When you go there, don’t miss stopping into the Café Sabarsky in the same building. This delightful café and its tasty menu harkens back to another time. It alone is worth a trip to 86th Street and Fifth Avenue.

On October 1, 2015, Neue Galerie New York opens “Berlin Metropolis: 1918-1933,” an exhibition devoted to Berlin during the Weimar period. The show explores the city using a multi-media approach, revealing this complex period through painting, drawing, sculpture, collage, photography, architecture, film, and fashion. The Neue Galerie is the sole venue for this show, where it will be on view through January 4, 2016.

The exhibition is organized by Dr. Olaf Peters, Professor of Art History at the Martin-Luther Universität Halle-Wittenberg, distinguished scholar, and historian. Dr. Peters recently curated the 2013 show at Neue Galerie, “Degenerate Art: The Attack on Modern Art in Nazi Germany, 1933,” as well as the 2010 exhibition “Otto Dix.” Pandiscio Co. is the designer for the “Berlin Metropolis” exhibition and catalogue.

Approximately 300 works will be on display, organized into five thematic groupings: The Birth of the Republic; A New Utopia; The “Neue Frau,” or New Woman; The Crisis of Modernity; and Into the Abyss. Highlights of the show include a number of major works created in Berlin during this time, such as Herbert Bayer, The Lonely Metropolitan (1932), Max Beckmann, Film Studio (1933); George Grosz, Metropolis (1917); Raoul Hausmann, Dada Triumphs (The Exacting Brain of a Bourgeois Calls Forth a World Movement) (1920); Ludwig Meidner, I and the City (1913); Lily Reich, Collage (1930); Rudolf Schlichter, Blind Power (1937), Georg Scholz, Of Things to Come (1922), as well as major works by John Heartfield and Hannah Höch. … READ MORE

The exhibition catalogue, published by Prestel Verlag, provides a complete historical overview of the period. It examines subjects ranging from art and architecture to film, music, fashion, and the “New Woman.” Dr. Peters serves as the catalogue editor, which features contributions from such scholars as Leonhard Helten, Sharon Jordan, Jürgen Müller, Janina Nentwig, Dorothy Price, and Adelheid Rasche.

Except From The Wall Street Journal, Lance Esplund’s Review, Dec. 22, 2015

“The Neue Galerie’s approximately 400 works are arranged densely, salon-style.
The collaged effect is one of immersion and onslaught — a charged, theatrical
and frenetic installation that never lets up.

Greeting you just inside the entrance is Ludwig Meidner’s self-portrait “I
and the City” (1913) — in which Berlin seemingly erupts from and rains down on
Meidner’s head. The painting sets the pace and energy for the exhibition, which
builds like a fever dream. Sharing space here are contemporary reconstructions
of original Dada artworks, including a one-legged tailor’s dummy, puppets and a
papier-mache pig in World War I military garb (the latter dangling from the
ceiling), which crowd the compact room’s center. Filling the walls are
paintings of chaotic Berlin by Beckmann and Grosz, Dada collages by John
Heartfield and Hannah Hoch, and Dada posters by Raoul Hausmann and Kurt
Schwitters.

Subsequent packed rooms are devoted to Modern architecture, photography and
other themes. In “The Neue Frau,” we encounter posters, fashion and set design,
jewelry, perfume bottles, paintings, collages and clothing. Schad’s sexually
explicit “Two Girls” (1928) is so objective that it verges on clinical. And
rarely seen works by Hoch further bolster her reputation as a remarkable
collagist — gifts that do not translate into her surreal paintings.

In “Into the Abyss,” artists are tackling political themes that challenge
National Socialism. Stunning, original photomontages of familiar images by
Heartfield — in which, for instance, an X-ray portrays Hitler as a maniacal,
crying baby with a spine made of stacked gold coins — reveal the artist to be
an extraordinary colorist, as well as a master-satirist.”