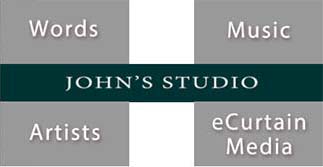 John is an accomplished songwriter and performer. He’s been writing a variety of songs ever since he picked up his first instrument at age eleven. He’s performed in bands and theater productions. Songwriting is his natural-born talent, and he has happily put in his ten thousand hours. He’s rewarded for those hours when he gets to work with musicians who make their instruments sing in ways he can only dream about.

Listen to a growing collection of his songs.

John is working on posting a selection of musical numbers from The International Multimedia Event One Hand!.

Controlling Time is an action-adventure novel. One reviewer described it as a cross between a Jason Bourne adventure and a Philip K. Dick novel.

His upcoming novel, Not Funny, is a fictionalized, deeply researched, historical account of events leading to the Cuban Missile Crisis and its consequences.

The Nation magazine (April 2021) features a story from the upcoming graphic novel by artist Lance Hansen and I. It’s entitled, “The Night They Came To Murder My Grandfather.” More stories from our novel will be available soon.

My Name Isn’t David is an exploration of the perils of pursuing perfection in life and love.

The Cat Psychic asks, ‘Does a person provide for a cat? Or vice versa?’ Only a real cat psychic can uncover a cat’s secrets.

Husband Wife Knife has a husband and wife talking about their money and a nasty switchblade.

Find out why John J Heartfield built, maintains, and curates The Official John Heartfield Exhibition. Beyond his responsibility to his grandfather’s legacy, he has immense love and respect for his grandfather. He describes the European summer vacations they shared as “some of my most treasured memories.”

In 2008, John was shocked to find that, even using the most logical phrases (“dada” “German political art” “anti-Nazi art” “20th century German political art”), he couldn’t find a mention of his grandfather with Google. How could that be? John Heartfield was one of the most influential artists of the 20th century. He resolved to restore the damage to his grandfather’s recognition and renown by beginning work on The Official John Heartfield Exhibition.

Today, the exhibition continues to grow far beyond his initial expectations. World-class modern artists, influenced by his grandfather’s life and work, are joining the exhibition. It will always remain true to the principles for which his grandfather risked his life. If they see dictators rising, informed people will choose decency over bigotry, knowledge over ignorance, and reason over violence. They will understand that accepting fascism is inviting suffering for all.

The John Heartfield Exhibition is always growing.
Please join our mailing list. We only send occasional emails with important updates.

John’s interactive multimedia presentation “Art As A Weapon” entertains and inspires audiences around the world. The presentation focuses on his grandfather’s legacy, historic events from 1916 to 1945, and the power of great political art. Venues such as major museums, art galleries, university lecture halls, corporate meeting rooms, outdoor monuments, and graphic novel stores have asked him to be part of exciting events.

A Sample of “Art As A Weapon” Presentations & Events

Many artists and small business owners have something in common. They struggle to create something great. Then they often discover it’s an even greater challenge to promote and market their creation. I have been on both sides of that equation. It’s why ended my career as a sought-after website consultant for large corporations and founded eCurtain Media. As the company’s director, my goal is to develop and promote great Internet content for artists and small businesses.

Professor Heartfield has designed and taught over twenty-five university courses in digital media design and programming in schools such as the Tisch School of the Arts (New York University), NYU Stern School of Business, City College of New York, The New School, The College Of New Jersey, and Queens College. New York University honored him with a Tisch School of the Arts Award “for pioneering work in interactive media.”

Japan’s Ministry of Trade and Industry (MITI), The Tokyo Metropolitan Government, and The Multimedia Association of Japan honored John by inviting him to Tokyo to inaugurate the Time 24 multimedia facility. While in Japan, he gave presentations to large audiences of government officials, corporate leaders, and multimedia professionals. He led a two-week seminar for brilliant young Japanese multimedia artists.

Red Burns, legendary founder and former chair of the Interactive Telecommunications Program at New York University, wrote of John J Heartfield, “From the moment he entered our program, John evidenced the wonderful combination of skills and talents which inspired him to study multimedia — a computer programmer and a musician with a keen appreciation for the visual arts. In other words, a wonderful blend of the technical and the artistic. John thrives on challenges, and he is a relentless learner.”

In Japan, Professor Heartfield Had The Nickname “BC” 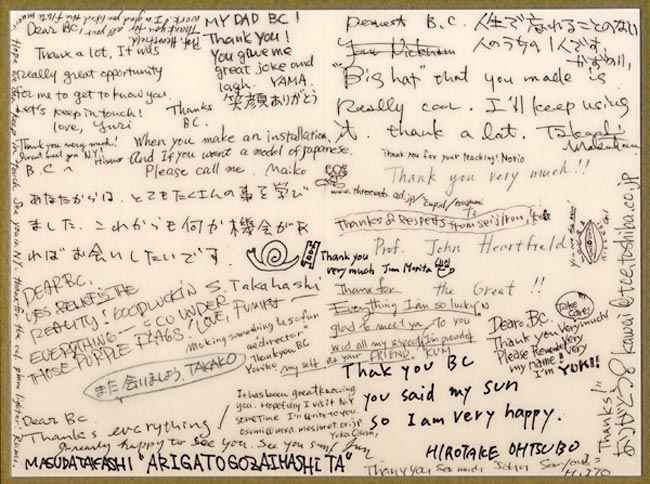 Tisch School Of The Arts Award 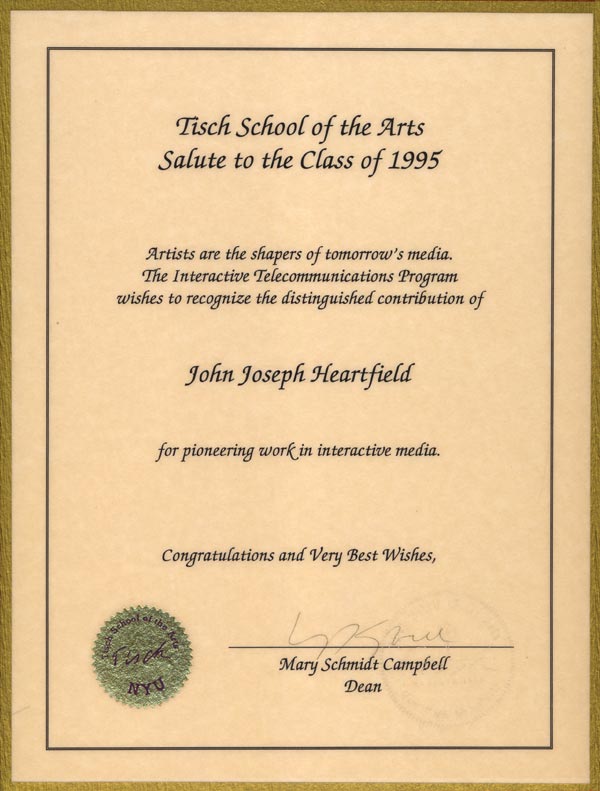