Ko stood close by the old man’s right shoulder, his eyes focused on me with the intensity of predator holding on the right moment to put down its prey.

I’d always been quick, but without a weapon, I harbored no illusions about my chances against Ko.

He was five-nine, but as wide as two men pressed together. He wore a blood-red silk tie knotted over a crisp pale yellow shirt. His charcoal-grey suit was custom-made by the city’s finest tailor. It was a testament to the talent of that master craftsman that it fit as well as it did.

However, I noticed a clear tension in certain areas of the cut when Ko, remaining perfectly balanced, leaned slightly towards me. It made me feel as if the center of my chest was directly in front of an arrow notched on a stretched bow.

The old man and I sat on plain wooden chairs on opposite sides of the familiar small round table.

The old man turned his head slightly towards his right and said, “Ko, I think I’ll have my cigar now.”

It wasn’t a request, an order, or a statement of desire. When the old man began a sentence with the words I think, whatever followed was simply something he expected to happen.

Ko was more than a wall between the old man and anything that might possibly do him harm. Ko was the instrument that converted the old man’s thoughts into reality.

On other nights, I’d heard the old man say, “Ko, I think this person has become a issue.”

That meant Ko could enjoy himself until the issue no longer resembled a human being.

If the old man said, “Ko, I think this person should understand…”

That person would survive, but there was never any doubt that everything would be clearly understood.

The old man studied me. His gaze forced me to think of things I’d done and all the things I still wanted to do. I remembered other nights when I’d stood behind him, looking at others sitting in a chair across from him. A wall clock seemed to click louder than it had those nights.

We all know one day will be our last. I’d never given it much thought.

Ko was slow to fetch the old man’s cigar. He knew I’d never harm the old man. However, he must have felt that, after what had happened, placing any amount of trust in me was an unnecessary leap of faith.

He was looking forward to the pleasure it would give him to slowly tear me apart. The only thing that might spoil his evening would be a poor decision by the old man. He had too much respect for him to imagine there was much chance of that.

“Have you forgotten my cigar, Ko?” the old man said. “After all, you’re already up.”

One corner of the old man’s lips rose slightly as he shared the double meaning of his words with me.

Ko still didn’t move. In a voice just louder than a whisper, but with a much different tone, the old man said to him, “Go now.”

Ko immediately left us. The old man lowered his eyes and studied a delicate cup between his hands. We were alone in the dimly lit room where he spent most of his time. The old man didn’t care for sunlight. Too many people were in it.

In one quick smooth motion he raised the cup to his lips, tipped it back, and replaced it almost precisely in the same spot. The movement struck me as a good model for the way he conducted business. Once he decided on an action, it was carried out as efficiently as possible.

After he drank, he turned his attention to me. I watched him decide. Then he gently nodded. He leaned back and spoke as if he were talking to himself.

“There are only two kinds of people in the world,” he said. “Those who act on what they believe should be done, regardless of any possible consequences, and those who think about consequences and decide action is simply not worth it. Sometimes, overcome by passion, a person will behave out of character, but that’s not the same as someone who takes the time to consider the possible negative outcomes of their actions and moves ahead anyway, whether minutes or years pass between cause and effect. When such a person also possesses intelligence, they will be respected. If fortune favors him, they will acquire power. There’s no shame in being the other type. It’s simply how you’re made.”

He shrugged so gently I couldn’t be certain I’d seen it. Then his tone changed. He looked directly at me.

“Ko tried to warn me,” he said. “I don’t understand why you allowed your friend to persuade you to give him time to prove his innocence. It doesn’t matter. If you had trusted my judgment, then nothing he said could have made you so foolish. Ko left as soon as you told me what you’d done, but it was almost two days before he made his way past those who took in your friend. Some of my associates are complaining Ko behaved harshly. Well, people always talk. That kind of talk fades away. However, you must be aware Ko believes cleaning up after you was beneath him.”

He looked down at his hands.

“I don’t need to tell you that Ko will always act on his beliefs.”

I also looked at the old man’s hands. In the past, I’d imagined him to be immortal, but suddenly I noticed that he was showing his age. I realized how much his disappointment in me had contributed to that and I was ashamed.

“If you were my blood, it might be different,” he said. “But not as things stand. I can’t allow you to remain here, a reminder to my enemies, strengthening them, informing them that you disobeyed me and I forgave you.”

So he had decided. It was a death sentence. I forced my mind to clamp down on a single thought.

I will not allow Ko to crush me like an insect.

He enjoyed prolonging the struggles of those who allowed him to get too close. He’d taught me things when it served his purpose. I concentrated on ways to give Ko as much pain as possible before he finished me.

The old man reached into a deep pocket of his simple black cloth jacket and took out an envelope.

“Take this,” he said. “Go away and never come back. It must appear we buried you somewhere your body would never be found. Only Ko and I can know what happened here tonight.”

Of course, my question didn’t want an answer.

“Have you suddenly decided to consider my interests?” he said.

His tone cut deeply into me.

“Don’t concern yourself,” he said, sounding weary. “The ones I can’t control still need me.”

There was nothing left to say. As I walked past him on the way out, I resisted the impulse to show him some sign of what I felt for him. For almost seven years, he’d treated me as if I was his favored son.

Ko stood in the hallway, managing to look as if he was leaning against the wall. It appeared as if he was smiling.

“I can’t believe you’re walking away from this,” he said. “You know what will happen. I always knew you were weak, but I didn’t think you could spend so much time with him without learning anything.”

It was essential to treat Ko with a certain wary respect. I’d seen what happened to those who made the mistake of thinking otherwise. But I’d never liked him. I finally had my chance to speak my mind, knowing that the old man had given me a safe pass.

I moved my face closer to his unreadable expression.

“You came into this world eager to kill anything in your path,” I said. “What did you learn?”

“What did I learn from the old man?” he said. “Patience. He taught me to wait for the right moment.”

His hand disappeared inside his jacket as quickly as a coiled snake. I jumped back. But when his hand slowly reappeared, all he was holding was the old man’s cigar, a Montecristo, not five hours off the plan from Cuba.

“You should hurry in with that before it gets stale,” I said.

He smiled with the corners of his lips. Then he turned and walked away. Suddenly, he stopped and turned around.

Ko said softly, “I promise you. There’ll be another night.”

I was careful when I stepped into the street. I slid into a deep shadow, glanced inside the envelope, and saw that it held a stack of hundred dollar bills. Later, when I carefully counted them, I discovered they added up to twenty-five thousand dollars.

I stashed the money in my jacket, zipped up against the cold, and considered how to get out of the city in the least visible manner.

The next night, sitting at the counter of a truck stop diner, I celebrated my eighteenth birthday.

I took a bite of stale cake. 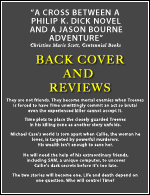