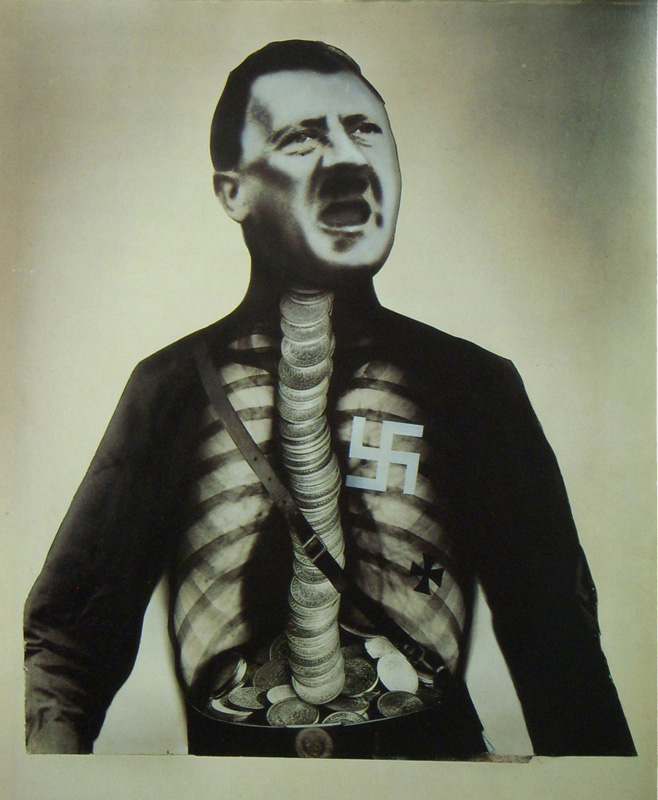 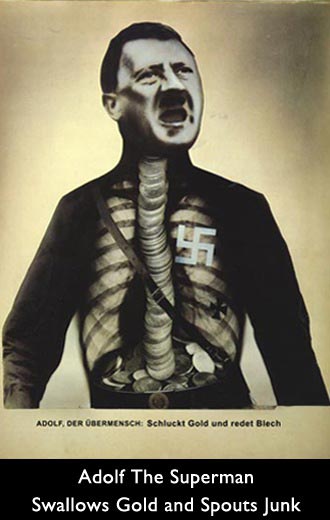 “Adolf The Superman” is John Heartfield’s famous portrait of Adolf Hitler with his chest and belly full of gold from his financial backers. It is certainly one of the most famous political posters. Heartfield combined an actual photo of Hitler with an x-ray to create this unforgettable image of a politician spouting ugliness to help move his country toward a profitable war.

Heartfield brilliant visual makes it clear the Führer is performing a miracle of political alchemy. Hitler converts gold, financial contributions from war investors, into garbage to stir up the German people.

This brilliant montage was originally an AIZ cover. A German count, a member of the German nobility, recognized the need for this montage to be distributed as a poster. The poster appeared on walls all over Berlin. Nazis became infuriated wherever this poster appeared.

Heartfield was not hiding. He was a resident of Berlin. The Nazis knew where he lived. He was beaten and thrown from the second story of a streetcar. Incredibly, he managed to avoid assassination until Easter Sunday, April 14, 1933. An SS assassination squad kicked in the door of his apartment. The thin five-foot-two artist jumped through his French windows.

The following is an excerpt from David King’s brilliant book John Heartfield, Laughter Is A Devastating Weapon: “Berlin, April 14, 1933: They came for him in the night. The paramilitary SS burst into the apartment block and headed straight for the raised ground floor studio where John Heartfield was in the middle of packing up his artwork, knowing that his only chance left of survival was a life in exile; he was on their most wanted list. Hearing them dislocating his heavy wooden door, he dived through his french windows and leapt over the balcony into the darkness. He landed badly and sprained his ankle. The Nazis made a flashlight sweep search of the darkened courtyard below yet failed to focus on an old metal bin in the far corner on which were displayed some enamel signs, the sort that advertise motor oil, or soap, or an aperitif. Under its battered lid, one of Hitler’s greatest enemies, far from having vanished into the ether, crouched in torment, squashed in a box full of the local residents’ garbage. For the next seven hours he hid there, toughing it out as he heard the nightmare sounds of the barbarians ransacking his studio and destroying his work. When the raid was over, Heartfield quietly and unobtrusively opened the lid, climbed out of the bin, exited the courtyard and began his nerve-racking flight to Prague. Germany was now enemy territory, there was a high price on his head and he had nothing.”