“Helmut Herzfeld
studied all the things he needed to know
as a graphic designer and artist,
[he…] was happy, optimistic, and always
surrounded by friends.”

By 1912, John Heartfield (born Helmut Herzfeld) was working as a commercial artist for Druckerei Gebrüder Bauer, a printing company in Mannheim, Germany.

He received his first book dust jacket commission. This graphic design was for Selected Works, a book of radical poetry by Franz Held, the father who abandoned him in a cottage in the woods in 1899. It is unknown if Heartfield forgave his father. Perhaps he came to understand the nature of his father’s mental illness. Or perhaps the young artist felt the need to get out his first book jacket. It was to be the first of many. From 1921 to 1929, Heartfield’s work as a graphic designer made him an enormous success in Berlin publishing, designing covers and interiors for authors such as Upton Sinclair, Kurt Tucholsky, and Sinclair Lewis.

As a young artist, John Heartfield (born Helmut Herzfeld) had already completed several oil paintings, mostly landscapes. After meeting George Grosz and discovering Dada, Heartfield burned all of his paintings except the one shown below. The painting was restored and survives in The John J Heartfield Collection.

Herzfeld’s “Uncle Ignaz” (the Aigen mayor who had taken in the four Herzfeld children when their parents abandoned them) wrote a letter to Heartfield’s actual uncle in Berlin. Herzfeld’s father, Franz Held, had come from a well-to-do Jewish family. His brother managed Franz Held’s inheritance, a sum of around 60,000 marks per child. “Uncle Ignaz” asked Helmut’s uncle for permission so the young soon-to-be political art genius Heartfield could study traditional art.

In effect, “Uncle Ignaz” was requesting permission for secondary school. However, there was a miscommunication. The trustee of Franz Held’s estate in Berlin thought Ignaz was asking for money so Helmut could attend a “university.” Believing it was too early for Helmut to attend a university, his uncle in Berlin replied with a forceful, “No!”

Helmut Herzfeld (AKA John Heartfield) moved to Munich a few years later. He completed a basic course and was admitted to the Malerakademie (Artist’s Academy). Although he was barely getting by on his meager allowance of 50 marks a month, he was known to work with joy and enthusiasm. 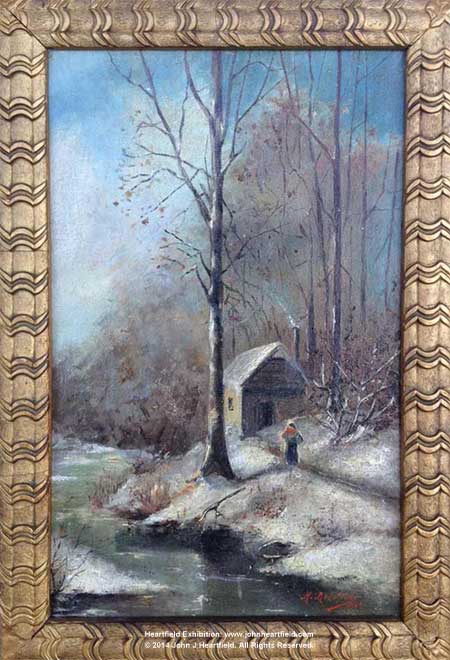 The Cottage In The Woods

Professor John J Heartfield is John Heartfield’s paternal grandson. Professor Heartfield presented Art & Politics, Politics & Art at the DADA WORLD FAIR in San Francisco. Please write to him about his live presentation regarding the relevance of his grandfather’s life and work to current events.