“I thought the war would never end.
And perhaps it never did, either.”

The graphic design genius John Heartfield invents multiple visual design techniques from 1921 to 1922. He partners with his brother, Wieland, in the Berlin publishing house Malik Verlag. Wieland takes care of business, and John creates graphic designs for books covers and interiors. Some customers buy books from Malik Verlag without intending to read the books. They only want to own Heartfield’s graphics.

Every Picture Tells A Story

Leaving behind the planned chaotic appearance of many Dada pieces, John Heartfield determines his collages should present a straightforward story to the viewer. He invents a technique where he tells a story by beginning with a visual on the front cover, continuing the narrative through the book’s spine, and ending on the back cover. In some cases, the story becomes a circular tale.

He also revolutionizes the look of type on book jackets, also known as dust covers, for famous authors and their novels by creating unique fonts and integrating the letters into his graphic designs. The result is sizes and perspectives that add layers to his graphics.

The Malik-Verlag covers reveal political beliefs Heartfield holds. Many of his covers challenge those who care about increasing their wealth regardless of the cost to anyone else – war profiteers, munitions manufacturers, and workhouse owners. Malik-Verlag, under the guidance of Wieland Herzfelde, becomes successful. Some authors are initially reluctant to have Heartfield design their books, feeling his work may be too radical. However, Wieland wins them over, and the outcome is some of the most famous book covers in history.

An Artist’s Freedom Is All

Berlin’s most prominent advertising agencies took notice of Heartfield’s talent. They offered Heartfield high-paying positions. He turned them down. He had to be free to express his ideas as he wanted. It paid off. By 1929, Heartfield had mastered his craft, and Deutschland Über Alles was proof of that.

Weimar Republic residents had never experienced a book like Deutschland, Deutschland,über alles (Germany, Germany, above all.) The Kurt Tucholsky – John Heartfield collaboration was a masterpiece, perfectly combining words and historic visual design. It was an immediate critical and commercial success. Heartfield’s playful graphics were a perfect match for Tucholsky’s brilliant satire.

Heartfield cut apart Weimar Republic photos to create the simple yet stunning images found in the exhibition Book Interiors section. “I Only Know Legal Paragraphs” uses as its base actual legal symbols.

An excerpt from Nancy Roth’s essay Heartfield and Modern Art
“In 1929, the Neuer Deutscher Verlag published Heartfield’s hugely successful satirical collaboration with Kurt Tucholsky, Deutschland, Deutschland, über alles, an irreverent picture-survey of the Weimar Republic. In this book, the photographs – selected from images taken by anonymous worker-photographers – function as snippets of the Republic itself that Tucholsky’s text variously questions, mocks, compares, and contrasts, with devastating effect.”

A Lifelong Love Of The Theater

He also works as a stage-set designer. He creates stage sets for Berlin’s Reinhardtbühne. 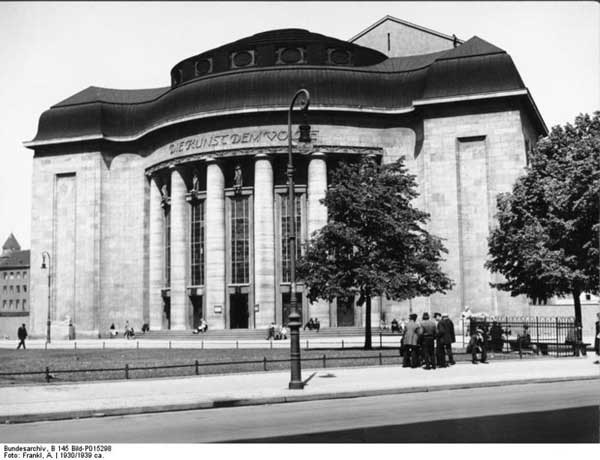