“Tell me, do you know what’s become of John Heartfield?”

This question, which sounds like the beginning of a detective story, is quite justified. It is almost as if one of the greatest and most original artists of or time had disappeared without a trace, disappeared without trace in our midst, in the GDR! […]

John Heartfield is well-known abroad. His works have been exhibited in the Soviet Union and in America with tremendous success. Not so in the GDR. Why? Are there perhaps people who believe Heartfield’s montages have to do with “formalism” because spines made from gold coins do not exist? Is that the reason why he is not encouraged to continue with his photomontages?

I believe that John Heartfield, considering his work and the magnitude of his art, deserves a place in the Academy. […]

And finally, I believe it would be well and good if one of those bodies that have to do with bestowing national awards seriously considered John Heartfield.

As a rule, national awards are given for books, plays, and films. But here lies a whole life’s work before us. Here is an artist who has proved all his life what he can do and where he stands. […]”

John Heartfield can only find work as a stage set designer in the Berlin theatre (Kammerspiele, Berliner Ensemble, etc.) during this period. He excels in this field as well. He creates exceptional stage sets and costumes for David Berg and Bertolt Brecht. Some of his greatest theatre work is displayed in the ART AS A WEAPON section of the exhibition.

Josef Stalin died in 1953. His personal reign of terror in the Soviet Union finally comes to a close. Communism in the second half of the twentieth century has cost the lives of millions. Sergei Tretyakov, Heartfield’s close friend in Moscow and author of the first John Heartfield monograph, is among those who were murdered under Stalin.

Heartfield’s belief in communism as a solution to the world’s problems fades quickly with each year and each abuse of power. 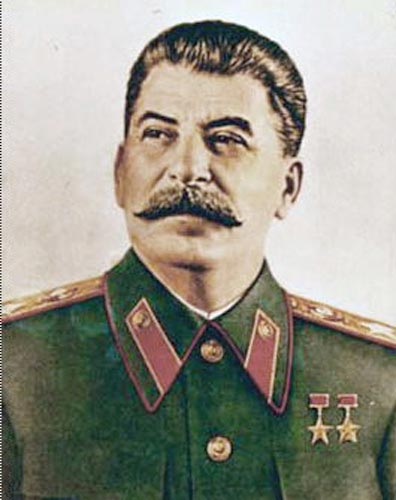 The tyrant Joseph Stalin dies in 1953. His brutality shocked even the East German communist regime causing it soften some of its more heinous policies.