Heartfield MoMA Exhibition Of Original Art Was An Enormous Success But Almost Cancelled., 1993

The John Heartfield Heartfield MoMA Exhibition Of Original Art Was A Triumph That Almost Did Not Happen, 1993

In 1993, the first major international exhibition of John Heartfield’s original art tours Europe and the United States. It ends in New York. Heartfield’s masterpieces of antifascist anti-Nazi art occupy half of the second floor of the world-famous Museumf Modern Art (MoMA). The space is barely large enough to hold the crowd who have their first opportunity to view close-up the magnificent work John Heartfield created with his own hands. Art critics, including The New York Times, unanimously agree John Heartfield is a modern art genius.

A stunning sequence of events precedes the MoMa exhibition. It was in danger of being cancelled days before it was scheduled to open. MoMA is one of the premier art museums in America. The MOMA director in charge of mounting the Heartfield exhibition was shocked and insulted when, at the last minute, Wolfgang Trautwein of the Heartfield Archiv,  Akademie Der Künste, Berlin, questions MoMA’s competence to care for the art in the way he believes is proper. The following is an excerpt from a letter written by Wolfgang Trautwein on August 24, 1990:

“After the discussions with the MOMA New York, I continued to urge the Museum of Modern Art San Francisco, where the [Heartfield] exhibition is at the moment, to guarantee the utmost best conservatory conditions, even threatening to retire the works, if this is not done.”

The quote above shows that in 1993 Wolfgang Trautwein, director of the Heartfield Archiv, Akademie der Künste, finally concedes that copyright permission for John Heartfield’s work does not belong to the Akademie Der Künste.

It is almost comical that Wolfgang Trautwein’s letter states that only a brief conversation with the president of the Akademie der Künste was enough to make it clear “that the Akademie Der Künste does not claim the Verwertungsrcrechte (copyright) of the works of John Heartfield.” In his letter to Heartfield’s rightful heirs, Wolfgang Trautwein offered no apology, reason, or justification for the years of violation of international copyright laws.

The curator, John J Heartfield, can now approve copyright requests for your project. He is happy to do so. Professor Heartfield wants to see his grandfather’s art against fascism and war in as many venues as possible. Therefore, the copyright approval process is simple and quick. Please CLICK THE COPYRIGHT ICON – TOP RIGHT to learn more about displaying John Heartfield’s art.

In April, 2014, it is the same Wolfgang Trautwein who categorically refuses John J Heartfield’s request for photographs or scans of his grandfather’s original art held inside the John Heartfield Archive. One reason he gives for this refusal is that Professor Heartfield does not have copyright permission to reproduce his grandfather’s art!

Negotiating for photographs and scans of John Heartfield’s art continues with the new director of the Heartfield Archiv, Werner Heegevaldt. At the moment, the Heartfield Archiv will consider providing the curator, John J Heartfield, with some photographs or scans of his grandfather’s art provided he signs an agreement not to display them on social media! It is impossible to imagine a position that would be more opposed to John Heartfield’s desire to show his work in as many venues as possible. A desire for which the anti-fascist artist risked his life.

Please refer to the ever-growing section of this exhibition entitled Hidden Genius for a more information about Heartfield Archive and the Akademie Der Künste (Germany Academy of Art). 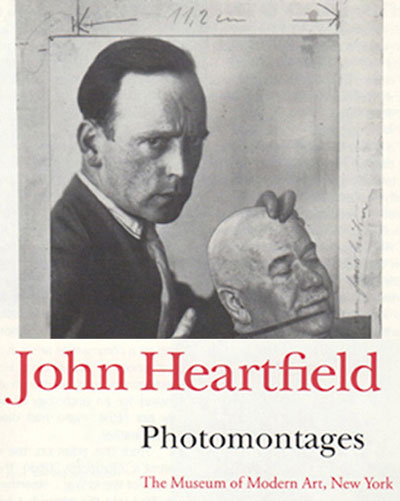