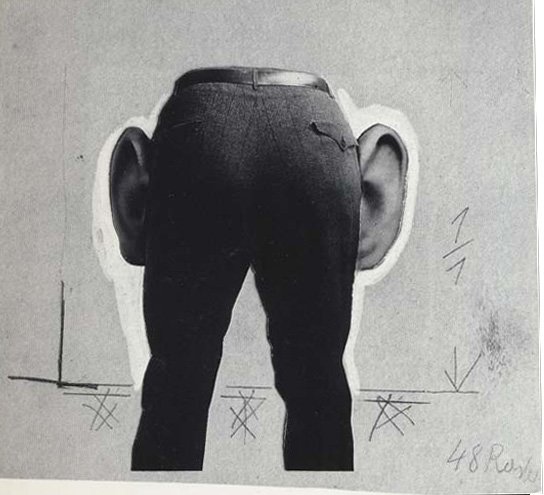 Released in 1929 by the Heartfield-Herzfelde publishing partnership Neuer Deutscher Verlag, Tucholsky’s picture-survey was a devastating critique of Weimar Republic society.

Placing on the sides of trousers looks like a deceptively simple Heartfield photo montage. However, to fully appreciate the image, note the use of shadow and the meticulous placement of elements. Heartfield was a perfectionist. He brought his original work to the reproducers after hours of solitary work. He would rush home with their product and then rework the image again and again.

A Berlin Saying is certainly one of John Heartfield’s most amusing images. He used his sharp sense of humor in his anti-Nazi images to devastating effect against fascists, Adolf Hitler, and The Third Reich. He used their boastful words against them. Many of his most famous collages included captions that satirically echoed fascist and Nazi propaganda. He cleverly revealed their hatred, lies, and logic errors.

This collage lets the viewer see the type of instruction to rotogravure masters that Heartfield always included in his art. This year, the exhibition plans to offer some high-resolution photographs of Heartfield original work, known by scholars as maquettes.

The politics in Weimar Republic, Germany, can be viewed as an strange mirror of the politics during the 2016 American presidential campaign. Germans were angry and concerned about their financial future. Minority groups, specifically Jews, were targeted as scapegoats for the country’s ills. In this climate, people are willing to trust their country to an authoritarian figure, a fascist or a dictator.

Was it a Berlin saying that Adolf Hitler was the only person who could make Germany great again?