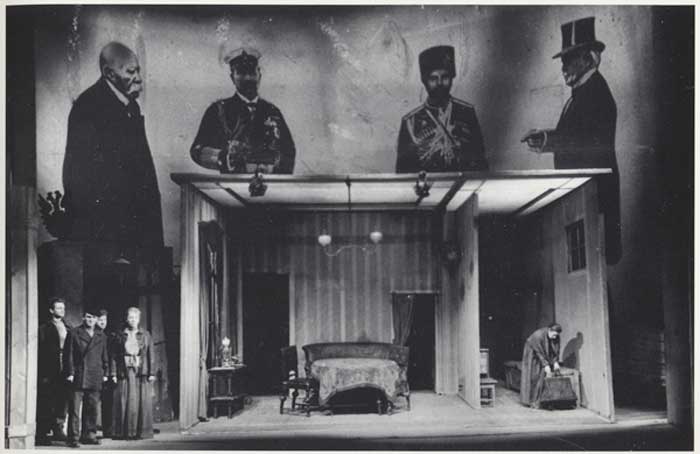 Bertolt Brecht relied of his lifelong friend and collaborator John Heartfield to create the atmosphere he needed to accent his powerful plays. Heartfield’s work was essential to produce the very complex screen projections needed for the Deutsches Theater production of Die Mutter ( The Mother ) in 1951.

Shown above is a photograph of the costumes and projections for Die Mutter ( The Mother ),an expansive visual tale of several revolutionaries.

A combination of transparent material and film allowed the slide projections to flutter down and shimmer before the audience. This gave the impression of a revolution in progress.

Brecht wrote Die Mutter ( The Mother ), as Adolf Hitler was rising to power in Germany. The Nazis arrested the leading actor during one performance to prevent the public from seeing the play.

Bertolt Brecht’s play and Heartfield’s projections are one more reminder of the power of art to affect politics and policy.

Bertolt Brecht was cut from the same cloth as Heartfield. He was a perfectionist who demanded that he get exactly what he wanted to realize his vision. It’s clear why the two were able to work together so well for so many years.