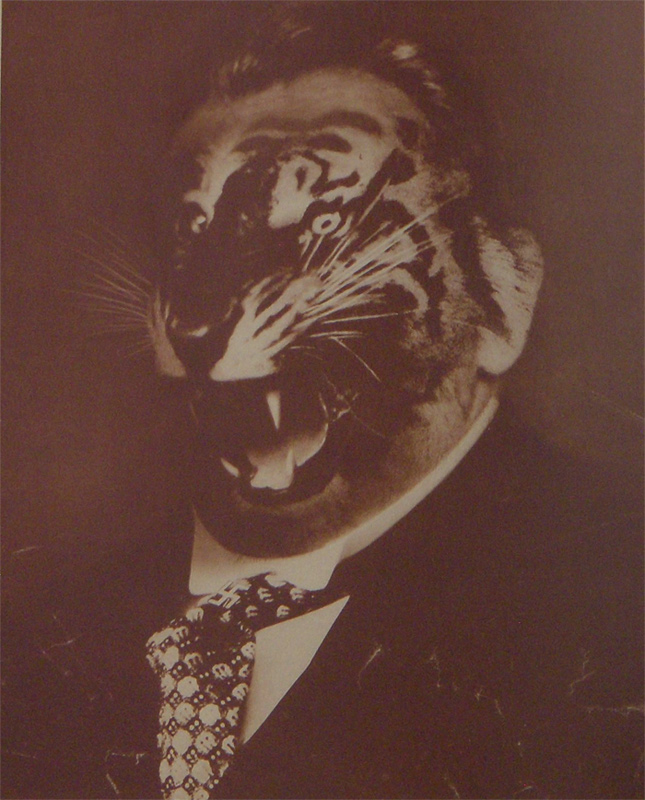 On The SPD Party Crisis

The SPD party crisis montage refers to the close relationship of Germany’s Weimar Republic SPD party to The Nazi Party. The photomontage is also known as “The Tiger Montage.” The Social Democratic Party (SPD) controlled Germany before Hitler took control in January 1933. In 1925, the SPD adopted a “capitalist leaning” philosophy. Its police commissioner, Karl Zorgiebel, employed brutal tactics to any resistance. He ordered his police force to open fire on a Berlin May Day parade. Thirty-two people were killed. The majority of them were innocent bystanders. Heartfield was severely beaten in a movie theater when he expressed his opinion of a newsreel with the SPD commissioner. As a muscular supporter of the SPD repeatedly punched him in the face, the five-foot-two-inch Heartfield simply responded: “You are a swine” over and over again.

This images, as with so many of Heartfield’s anti-fascist images, could almost be a symbol for the United States Republican Party. Members of the Republican Party are being dragged so far to the right the very face of their party is changing. As with all of Heartfield’s art, there is more to this photo montage than first meets the eye. The formal attire of the man/tiger representing a politician of the SPD Party is Heartfield’s visual comment that out-of-control greed capitalism was a key component in the corruption of the SPD. There were three major parties in Weimar Germany before Hitler took complete control – The SPD communist party with its tacit support of the National Socialists (Nazi Party), the National Socialists, and the KPD communist party. Heartfield joined the KPD party as a young man. The KPD party was the favored political party of most influential artists and idealistic intellectuals in the Weimar Republic. Heartfield, a lifelong pacifist, believed in his youth that war and injustice could be eliminated through communist ideals. It is ironic that he was deported from England after the war after he begged to stay in London for “his work and his health.” This exile was most likely due to his art related to communism. The political idealism of the young communist artist in the Weimar Republic was betrayed in many ways by the brutal East German communist regime. The political system Heartfield believed in as a young man turned on him in his senior years and nearly ended his life. Upon his forced return to East Germany, Heartfield narrowly avoided being tried for treason because of the length of his stay and his request to remain in London. He was denied membership in the East German Academy of Arts along with the health benefits he would have received when he suffered multiple heart attacks. You can honor this courageous political artist and express your views on the current state of America’s crisis party by wearing a Party Crisis (Tiger Montage) T-Shirt. The montage has been cropped above the tie to make it a universal statement of how the lack of morality and reason results in political savagery.