Never Again! One Of The Most Famous Works Of Antiwar Art In History 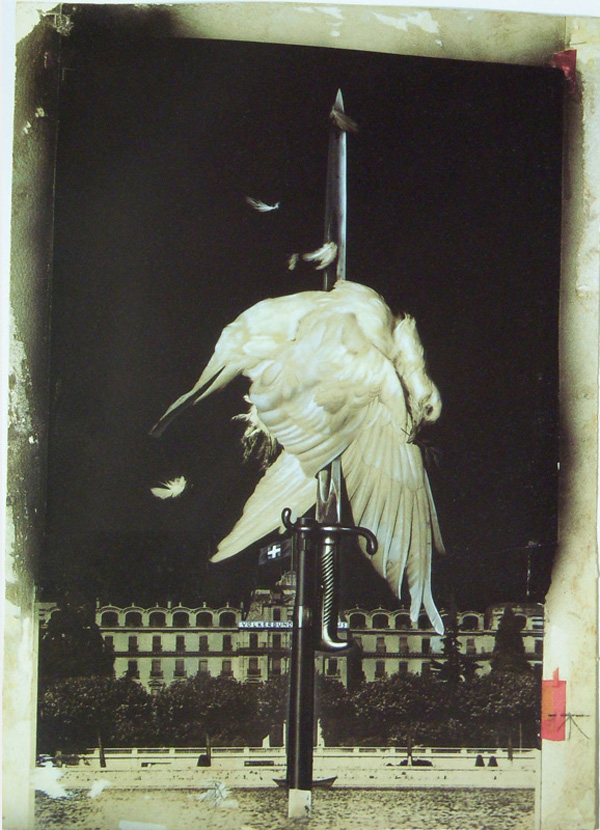 We Must Say Never Again!

This John Heartfield poster had several incarnations. It was an AIZ cover to protest the Geneva concessions to Adolf Hitler. There was also a 1960 variation.

Heartfield’s impaled dove of peace is universally regarded as a masterpiece of political imagery. It is certainly one of Heartfield’s most famous and dramatic political statements.

The collage (photo montage) of the dove of peace on a bayonet is shown before the League of Nations building. A swastika replaces the Swiss flag.

In religious terms, the dove may symbolize the Holy Spirit or the human soul. The dove with an olive branch in its mouth is a symbol of peace in the biblical story of Noah’s arc. Heartfield drew inspiration from his impressive memory of text and images.

Heartfield’s goal was to use his political art “as a weapon” to awaken the world to Hitler’s expanding power. The world accepted Hitler at first. He was regarded as a strong political leader. His power depended on worldwide financial support. Banks and steel manufacturers were more than happy to support him regardless of his ugly views.

My grandfather loved animals and nature. You can see this for yourself in photos in The John J Heartfield Collection in the LIFE AS A FIGHTER section of the exhibition. The brutality of this image was surely a difficult personal and emotional statement.

John Heartfield revised this anti-war masterpiece for a 1960 poster. It was published with a simple caption: “Never again!” View The 1960 Poster.

This 1932 photomontage appeared in the left-wing newspaper AIZ No.48, November 27. It was designed in response to a counter demonstration against the fascist “Union nationale” in Geneva during which 13 people were killed by the military on 9 November 1932. It was entitled: “The meaning of Geneva: where capital lives, peace cannot live!” Its background showed the League of Nations building in Geneva – i.e. the symbol of the organization that was supposed to maintain world peace since its foundation in 1920. On top of it Heartfield placed a Swiss flag altered to resemble a swastika. The small print in the montage said: “In Geneva, the city of the League of Nations, machine guns were fired at the masses of workers demonstrating against fascism. 15 dead, over 60 injured remained on the site. (Detailed photo report of our special reporter on the inside pages)”

The motif of the dove was probably a pun on a stamp issued by Switzerland on the occasion of the beginning of the Disarmament Conference in February 1932. The stamp shows a dove of peace standing on a broken sword that is held by a hand. Heartfield’s montage could also have been inspired by a caricature of this Swiss stamp from the soviet newspaper Pravda about the “true” intentions of the conference that had been published in a previous edition of the AIZ. This caricature showed an impaled peace dove on a Swiss stamp mock-up.

Heartfield’s montage is spellbinding. In it we see the feathers of the dove still floating around the dead animal which evokes the feeling of immediacy.

Today, Heartfield’s 1960 version of the speared dove of peace is regarded as a masterpiece of political art. It is probably one of Heartfield’s most famous political statements and has been used several times in different ways in countries around the world. The British hardcore punk band Discharge, for example, used Heartfield’s montage as cover artwork for their 1981 EP Never Again.