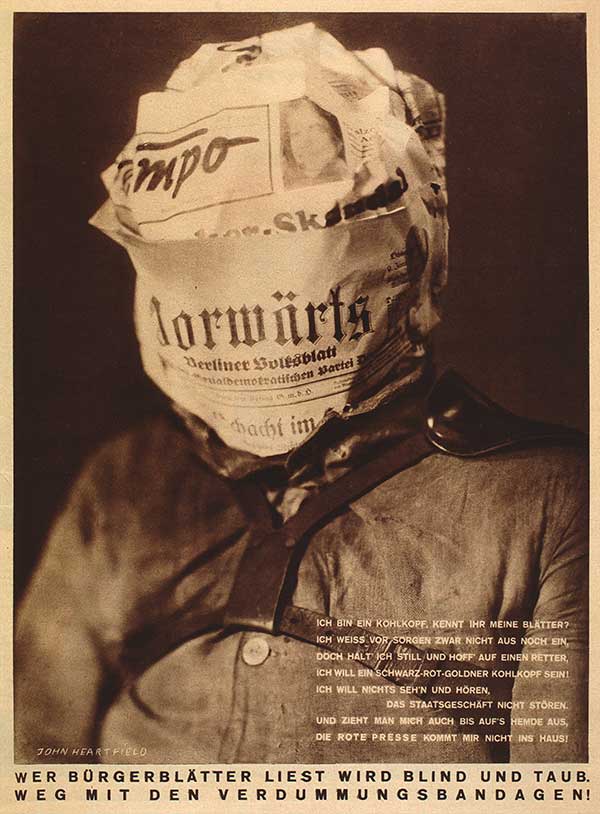 In one of his most iconic photomontages, John Heartfield equated “bourgeois newspapers” (Burgerblatter) with the fake news of his day.

The pure artistry of his craft is apparent in the manner he realistically wrapped the newspapers of his day around a head to give an immediate visual jolt to his target audience. It’s important to realize he achieved this effect using only scissors and a glue pot.

Ms. Hofmann is one of the exhibition’s most astute and valuable contributors.

This piece was John Heartfield’s first contribution to the AIZ (Worker’s Illustrated Journal) which he had joined in February 1930. The work was an arranged photo.

The photo shows a man whose head is wrapped in two newspapers. Note the discrepancy: Newspapers are supposed to enlighten us. These newspapers blind its reader. Tempo was a liberal-democratic newspaper which was mainly read in and around Berlin. It existed from 1928 to 1933. Its most famous contributors were Erika Mann and Kurt Tucholsky. Vorwärts is a newspaper run by the Social Democratic Party of Germany. It was founded in 1876. In 1933 it was banned in Germany but its publication continued in exile until 1940. After the war it was refounded and exists to this day. Both Tempo and Vorwärts competed with the AIZ for readers.

The Tempo and Vorwärts reader’s outfit in Heartfield’s work clearly identifies him as a member of the working class. His jacket is very simple. Also, he wears some sort of harness which could symbolize someone who carried heavy burdens. The man could be an unskilled laborer, a hodman or a carrier. At the same time, the straps evoke the image of a child harness which would indicate that he is on a leash.

Basically, the photo already contains the message which is also given by the caption under the photo.

It says: “Reading the bourgeois press makes you blind and deaf. Rip away these dumbing-down bandages!”

The caption in the photo reads:

“I am a cabbage head. Do you know my leaves?
I am sick with worry,
But keep still and hope for a savior,
I want to be a black-red-golden cabbage head!
I don’t want to see or hear anything,
Nor disrupt state affairs.
Even if they bleed me dry,
The red press won’t enter my house!”

The line “I want to be a black-red-golden cabbage head!” is a dig at the Black-red-gold banner of the Reich. This was an organization formed by the Democratic Party, the German Center Party, and the Social Democratic Party to defend the Weimar democracy.

The AIZ promoted the idea that the Social Democratic Party and other organizations were stabilizing the existing system, which prevented social and political change and prolonged exploitation and corruption.

What kind of paper was the AIZ

The AIZ was an illustrated magazine run by the left-wing publisher Willi Münzenberg. It was a progressive magazine that was first published on the 30th of November, 1924, as a bi-weekly. It was first published on 30 November 1924 as a biweekly. After its circulation increased to 200,000 copies in 1926, it appeared weekly on street corner newsstands throughout Berlin. The AIZ was a strong and consistent opponent of Nazi policies and Hitler’s agenda. Its publisher, Willi Münzenberg, courageously featured John Heartfield’s antifascist collages mocking Hitler, fascism, and the Nazi Party on AIZ covers. He brought Heartfield’s political art masterpieces to the public on the front of a magazine that boasted Germany’s second highest circulation rate for any magazine publication.

The AIZ was a broad mix of illustrated reports and features on national and international political scandals, social injustice, exploitation and systemic oppression, abstracts of novels and poems. The photo magazine was mainly read by a working-class and middle-class audience.

In 1930, Willi Münzenberg asked John Heartfield to join the AIZ which he did in February of the same year. Heartfield and the AIZ were a perfect match. Heartfield designed most of his renowned political photos and subversive montages for the AIZ.

By 1933, the AIZ had a weekly print run of more than half a million copies. Its reading public was even larger since the AIZ explicitly encouraged its readers to share their copies with others.

As soon as Hitler seized power in 1933, the AIZ was banned in Germany. So Münzenberg moved the production of the AIZ into exile in Prague. From there it was smuggled to Germany.

In 1936, the AIZ was renamed into Volks-Illustrierte (VI) reflecting the new Popular Front policy. This advertised cooperation between all parties and organizations in the fight against fascism.

The magazine shut down in 1939. By then, John Heartfield had produced some 240 photomontages for the AIZ and VI. He inspired many people. Among them artists such as Hannah Höch, Barbara Kruger, Martha Rosler, Peter Kennard and Christer Themptander. In the current times of fake news, homophobia, sexism, racism and rising fascism, witty photomontages are being used yet again to raise awareness. For further insight, check out the artists on this website under Modern Art.