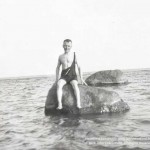 Jonny loved the ocean and swimming. This photo is a fine display of the frail physique that dared to challenged The Third Reich. 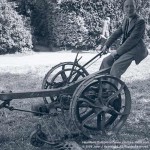 This shows the other side of John Heartfield’s personality. The fun-loving playful man who loved nature and was always ready for an adventure. 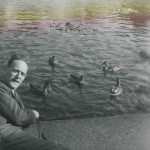 Heartfield was not a sentimentalist about nature, but he loved all of its aspects, especially birds and animals.

Though his famous Dada and anti-fascist art revolved around the urban and political, John Heartfield’s personality was rooted in his love of nature and animals. After he was abandoned in a cottage in the woods at the age of eight, he spent his days in the woods. Outside his foster home, he would explore nature, eating wild nuts and berries in the German forest.As a young artist, he destroyed almost all but one of his oil paintings after he was introduced to Dada in Berlin. Only one John Heartfield painting survives.

CLICK HERE to view John Heartfield’s only surviving oil painting, The Cottage In The Woods. This painting is part of the John J Heartfield Collection.

The anti-war artist’s early paintings were nature scenes. One might speculate that, in addition to his growing rebellion against accepted art forms, Heartfield felt that he did not possess the talent to represent nature as he saw it.

During his tumultuous courageous life, he found great joy in natural settings. He found peace in the companionship of animals, both wild and domestic.