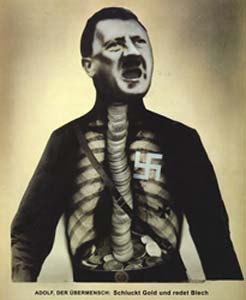 John Heartfield’s photomontage of Adolf Hitler with his chest and belly full of gold from his financial supporters is one of the artist’s most famous images. …more

In this searing mocking Adolf Hitler Portrait, John Heartfield shows the führer performing a miracle of political alchemy as he converts financial contributions from war investors into nonsense into order to stir up the people.

This montage of Hitler was originally an AIZ Magazine Cover and appeared all over street corners 1932 Berlin.

It was a count, a member of the German nobility, who recognized the need for this montage to be reproduced as a poster and to be distributed throughout a Berlin under the shadow of the Nazi Party.