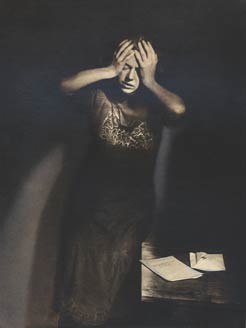 Governments have sought to terrorize and control women in many ways. Many of these practices continue all around the world. From spreading medical propaganda lies in order to control their bodies to barbaric practices such as forced surgery upon them, the assault on women’s physical and mental health goes on. In this minimalist brilliant piece of political art, John Heartfield exposed the Nazi tactics that were meant to silence German women.

Share your thoughts on this political masterpiece. Your comments may be posted in the “VISITORS COMMENTS” section of the exhibition.